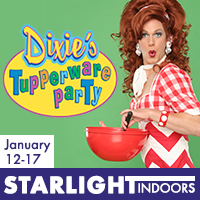 A trial run with an indoor production in its traditional “off season” proved successful enough last winter that Starlight Theatre has come back in 2016 with a four-show Starlight Indoors series.

Kicking off the fun in heated, indoor, intimate performance spaces at Starlight starting next Tuesday, Jan. 12, is Dixie’s Tupperware Party. The adult comedy makes its Kansas City debut for a limited engagement of eight performances Jan. 12-17.

Written by Kris Andersson, Dixie’s Tupperware Party stars Dixie Longate, a fast-talking Tupperware lady who packed up her catalogs, left her children in an Alabama trailer park and journeyed across America to entertain audiences – and to hawk the most fabulous assortment of Tupperware ever sold on a stage!

When Dixie first took her show and bawdy humor Off-Broadway eight years ago, she garnered a prestigious 2008 Drama Desk Award nomination for Outstanding Solo Performance. The touring production has since logged more than 1,000 performances worldwide. The show is produced by Down South LLC, directed by Patrick Richwood, and features costumes designed by Dixie herself and lighting designed by Richard Winkler.

Audiences will delight as Dixie shares her twist on a good old-fashioned Tupperware party, complete with outrageously funny tales, heartfelt accounts, free giveaways and lots of audience participation. A member of the illustrious “#1 Tupperware Seller in the World” Club, Dixie also educates her guests on the many “alternative uses” she has discovered for her plastic products.

Audience members will be sitting comfortably in Starlight’s climate-controlled, 12,000-square-foot Cohen Community Stage House with just over 500 seats available for each performance. “Patrons really enjoyed seeing a show (50 Shades! The Musical Parody) for the first time in the intimate, indoor setting of our stage house last winter, so we’re thrilled to expand the series,” said Rich Baker, Starlight president and CEO. “This is our invitation to Kansas City residents and visitors to experience the magic of live theatre at Starlight on more of a year-round basis.”

Tickets for Dixie’s Tupperware Party at Starlight Indoors can be purchased at www.kcstarlight.com, by calling 816.363.STAR (7827) or at the Starlight box office at 4600 Starlight Road, Kansas City, MO 64132. Ticket prices begin at $30; a limited number of VIP ticket packages are also available. Discount pricing for groups of 10 or more is offered through Starlight’s Group Sales department at 816.997.1137 or groups@kcstarlight.com.

In addition to Dixie’s Tupperware Party, Starlight Indoors will present three more Off-Broadway shows throughout January. They are:

About Starlight Theatre
Starlight Theatre, winner of the 2013 Venue Excellence Award from the International Association of Venue Managers (IAVM), is the largest and oldest performing arts organization in Kansas City and the second-largest outdoor producing theatre in the country. Opened as a theater in 1950 and as a not-for-profit organization in 1951, Starlight presents and produces Broadway musicals and concerts. It also offers extensive community outreach and educational programming, including classes, scholarships and Starlight’s Blue Star Awards, one of the largest high school musical theatre award programs in the nation.