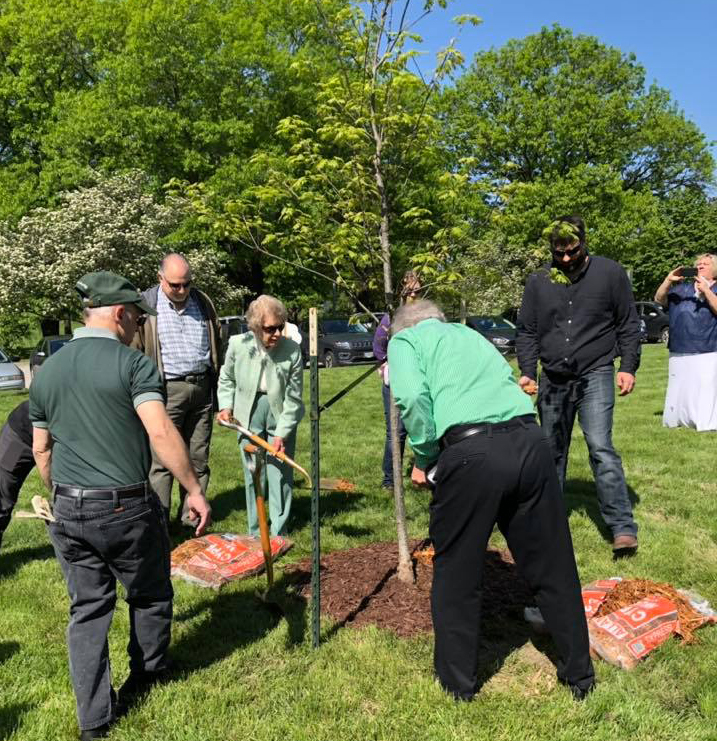 KC Parks supporters gathered in Loose Park on May 4 to celebrate Arbor Day and honor former employee, George L. Eib, with a tree planted in his memory. 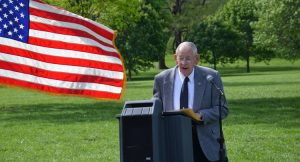 A Kansas City native, George Eib (1931-2018) grew up in Swope Park where his grandfather was supervisor of Floriculture. George attended Mark Twain grade school, Southeast High School and Kansas State University graduating in 1956 with a degree in Landscape Architecture.  In 1953 he married Marlene and they have four sons and five grandchildren which are their pride and joy. George served in the Air Force as an officer from 1956 to 1959. Returning to Kansas City, he went to work again for Parks and Recreation as nurseryman and in 1964 was promoted to Landscape Architect in charge of Horticulture and Park Operations. He rose to the position of Superintendent of Forestry and Landscaping where he served until his retirement in 1993 with 35 years of service. For many years George was the producer of the Kansas City Flower, Lawn and Garden Show.

George was active in his church and in many local and national organizations, serving in leadership capacities. He served on the committee which formed the FFA National Floriculture, Nursery/Landscape and Forestry contest. He worked with Chuck Brasher and others to establish the area  in Loose Park, known as the Stanley R. McLane Arboretum and has assisted in the planning of the arboretum and the Arbor Day Committee for 39 years.

The Kansas City community has benefited from George’s many years of service, and is known as a “city of trees” due to his untiring efforts to beautify Kansas City, Missouri. His knowledge of trees and plant material has gained him many friends among his peers and within the community, he is known by many as “Mr. Tree”. In his honor, a Northern Red Oak, a common symbol of strength and endurance, was planted  southeast of the Jacob Loose statue near the main parking lot in Loose Park.

In addition, the City of Kansas City, Missouri was recognized as a Tree City for the 31st year.  KCMO is the second oldest Tree City USA in the state of Missouri.