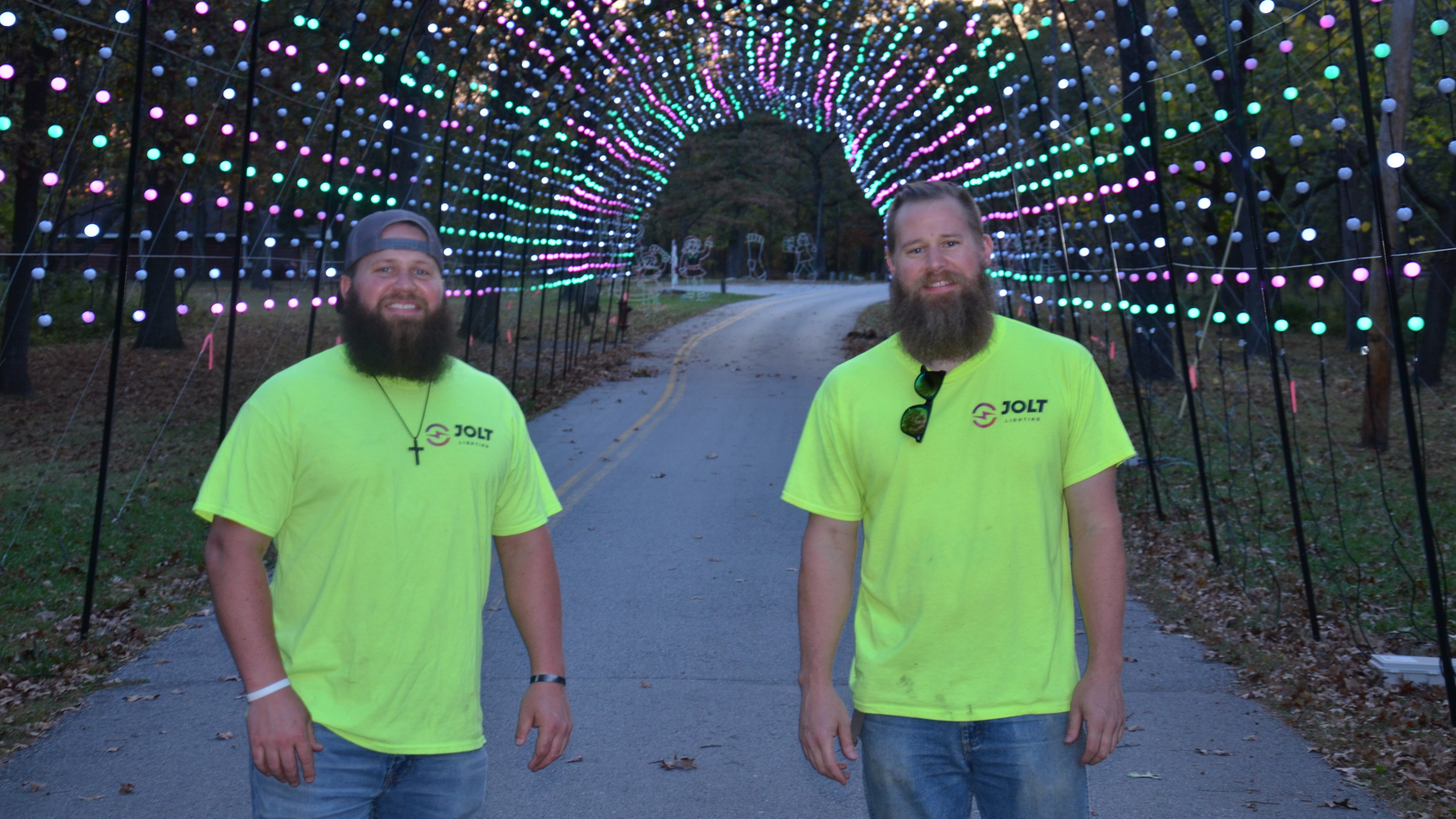 Every day, from 8:30am to 8 or 9pm you will find brothers, Aaron and Skylar O’Dell in Swope Park.  They are not biking, hiking, or grilling out, they are creating Winter Magic along Oakwood Drive at Camp Lake of the Woods.  They say, “Winter Magic is a World where Winter Wonder awaits you”. Winter Magic is a mile-long drive-thru Christmas lights event in Kansas City.  “Ever since we were kids, we would dream of working together,” says Aaron O’Dell.

Aaron O’Dell started Jolt Lighting in 2015, he had already been in the industry for 10 years and was looking to do something new.  He believed that Christmas displays were too old fashioned and that the future held brighter, more modern displays that pulled the audience into the story.  Aaron enlisted the help of his youngest brother, Skylar, and they created Jolt Lighting in the shop in Aaron’s backyard.  But after three months, the small shop would no longer contain them.  They moved out of the backyard and over to a commercial space in Grandview, MO (a southern suburb of Kansas City, MO) where they continue to design and create the coolest Christmas displays around. The idea for Winter Magic came to mind three years ago, but the timing just did not seem right.

Fast forward to 2020 and Covid.  The manufacturing business slowed down and staff had to be laid off.  Now seemed to be the right time for Winter Magic and a partnership with KC Parks was formed.  Aaron has the skills of electrical engineering and music, Skylar, a former golf pro, has the gift of selling and creating. Now every day the brothers are back out in the woods creating. “It’s a creation like what we did as kids, but it’s not forts and treehouses anymore, it’s nine themed areas, the longest animated light tunnel in the Midwest, pixel town, music and more,” says O’Dell.  “Covid gave us the opportunity to pursue this dream.  We see this as a good thing.”

And soon you will be able to see if this is a good thing too. Winter Magic opens November 2nd in Swope Park at 7332 Oakwood Drive, Kansas City, MO.  You can get tickets now at: https://wintermagickc.com/.

A portion of the proceeds for Winter Magic benefit KC Parks Scholarship Fund.