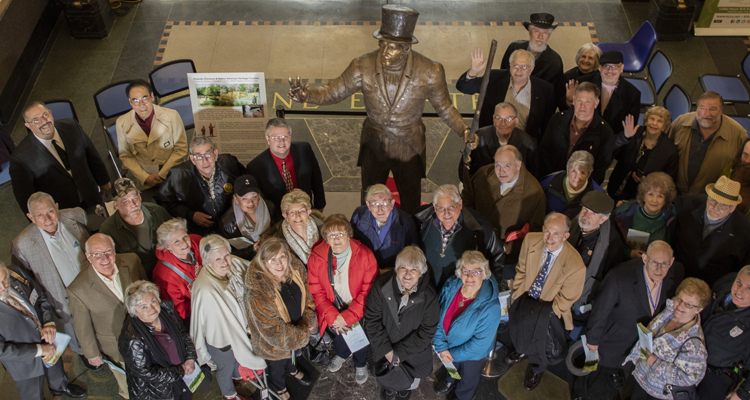 KC Parks, City of Fountains Foundation, City officials and artist Kwan Wu gathered in City Hall on March 6 for the ribbon cutting/installation of the Francois Chouteau sculpture. The bronze sculpture is the first of four sculptures produced by Kwan Wu that will be installed at the Chouteau Heritage Fountain in the Northland. The sculpture, sponsored by the Ford Motor Company Fund, will be on display in the rotunda of City Hall for the next three months.

In 1821, Francois Chouteau established a Fur Trading Post at the confluence of Rock Creek and the Missouri River in Clay County, Missouri. Here he traded European goods with the Native American inhabitants for their animal furs. When the Missouri River flood of 1826 wiped out this fur trading business, Chouteau re-established his post on the southside of the river where he built his home, warehouse, and steamboat landing just north of today’s City Market. He eventually acquired some 1200 acres where Kansas City stands today.

The Chouteau Heritage Fountain honors the founder of Kansas City, Francois Chouteau, and the Native Americans who lived and traded in the area. It will be located on the west side of Chouteau Parkway south of Interstate 35 and north of Parvin Road, nestled along the Chouteau Greenway near the Chouteau Rain Gardens.  The fountain will be a permanent monument that recreates the river bluffs where Rock Creek and the Missouri River converged.