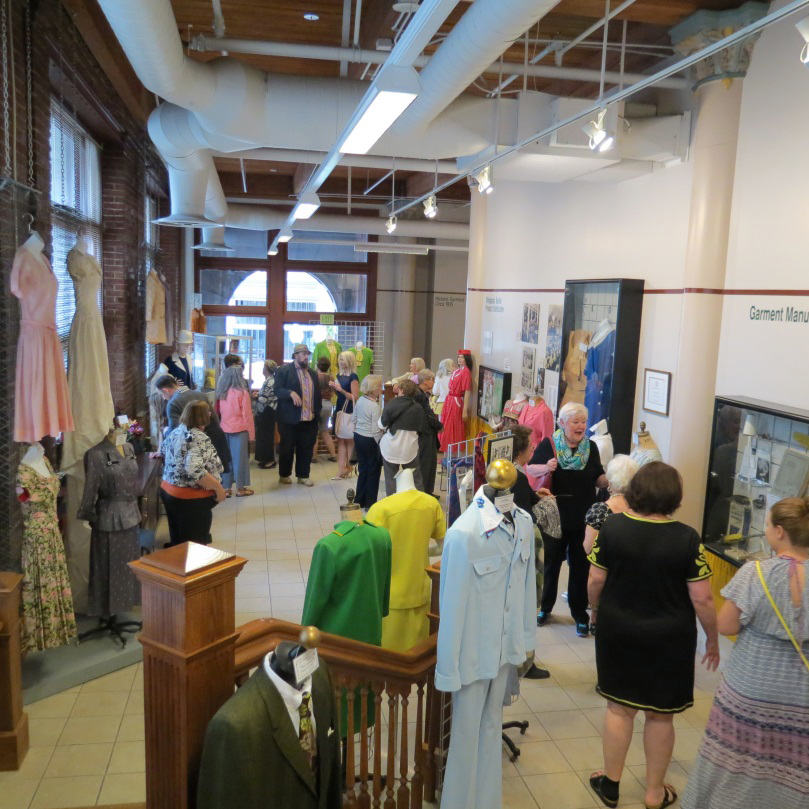 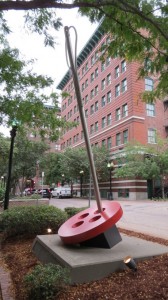 Decades ago in the years after World War I, Kansas City’s garment district was second only to New York City’s in size. The process of designing and manufacturing clothes, especially men’s and women’s coats and suits, created thousands of local jobs—more than any other industry except the stockyards.

Five years ago the City’s Parks and Recreation Department created the Garment District Park (marked by a giant-sized needle and button sculpture) to recognize and stabilize the area centered at 8th Street and Broadway. Last week park officials held a reception there to celebrate a new acquisition—a collection of over 300 Kansas City-made garments and accessories from the Historic Garment District Museum at 801 Broadway.  In addition to acquiring this collection, the Parks and Recreation Department now operates and manages the Historic Garment District Museum at the Broadway location.

The small museum located in DST’s Poindexter building owes its beginnings largely to Ann Brownfield, who designed clothes and purchased fabric from manufacturers around the world before starting her own company. The industry went into decline after the mid-1950s due to several reasons, including a changing labor pool, drop in mom-and-pop dress stores, and more casual fashion styles. “Blue jeans helped kill us,” Brownfield says.

Some years later Brownfield was walking through the downtown district and was shocked to witness thousands of buttons, bows, buckles and snaps being tossed out of a former garment manufacturing building. “I thought, oh my gosh! Nobody is ever going to know all this was down here.”

So Brownfield, assisted by Harvey Fried, who also worked in the garment trade, gathered together old photos, artifacts and clothes—including some of her own “Mad Men”-era outfits—to furnish a small museum, where they served as curators and offered tours. Brownfield also co-authored a book about Kansas City’s fashion industry, We Were Hanging By a Thread, with David Jackson of the Jackson County Historical Society.

Now Brownfield and Fried have retired and handed over the museum to the Parks Department, which also operates the Kansas City Museum.

“The Historic Garment District is a significant part of Kansas City’s history, and the museum that Ann and Harvey have created and sustained is a gem,” says Kansas City Museum Executive Director Anna Marie Tutera, who notes that the collection and the opportunity to manage the Broadway location allows the Kansas City Museum to add to its stellar collection (one of the best in the region) of historical clothing, textiles and costumes.

“We’re honored and grateful that Ann and Harvey would entrust this collection and their museum to the City’s Parks and Recreation Department. We look forward to continuing our strong relationship with them,” says Mark McHenry, department director.

The Historic Garment District Museum is open to the public on Saturday and by appointment Wednesday through Friday.