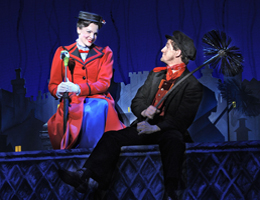 As preparations continue for its 65th Broadway season under the stars, Starlight Theatre will present six nationally touring hit Broadway productions this summer. Plus, as it does each season, Starlight will self-produce one full-scale Broadway musical. In 2015, the locally produced show is Disney and Cameron Mackintosh’s magical musical Mary Poppins, which takes the Starlight stage July 24-August1.

To ensure Mary Poppins is a supercalifragilistic success artistically, Starlight is pleased to announce it has reassembled the production “dream team” that oversaw the 2014 production of The Sound of Music, the theatre’s top-attended show last summer.

Returning to Starlight for the 10th time is Tony Award®-nominated director Philip Wm. McKinley, who is credited with shoring up Broadway’s Spider-Man: Turn Off the Dark and turning it into a box office hit. He also directed The Boy from OZ starring Hugh Jackman, among his numerous other Broadway credits. Director McKinley is again joined by producer Donna Thomason, who has enjoyed a 25-year association with Starlight and serves as president and creative director of Starlight’s subsidiary company, EPIC Innovative Events, Inc.

“Before he even left Kansas City after directing The Sound of Music last July, Phil learned that we Starlight Theatre Announces 2015 Broadway Season with Five Shows, Two Weekend Specials planned to produce Mary Poppins in 2015 – and he really wanted to return to direct the show. Schedule conflicts with a project he was developing wouldn’t allow it, however, so I gladly agreed to take on the directing assignment,” Thomason said. “Then, Phil called us back just a couple of weeks ago to report that his summer schedule had freed up, so we decided to welcome him back with open arms. I’m thrilled we’ll be working together again to bring this illusion-packed, danceheavy, technically exacting show to life for Starlight audiences.”

Alongside McKinley as director and Thomason as producer, musical director Anthony Edwards also returns to the creative dream team for Mary Poppins, which marks his 10th show in this role at Starlight. The trio is pleased to add a new talent to their team in 2015 – choreographer Alex Sanchez of New York’s Broadway Dance Center.

And, for the icing on the cake, New York actress Analisa Leaming, who captured audience members’ hearts with her memorable performance as Maria in The Sound of Music last summer, reclaims her leading-lady status as no-nonsense nanny Mary Poppins. Leaming this spring made her Broadway debut in the revival of On the Twentieth Century, starring Kristin Chenoweth. She also has appeared Off-Broadway in The Fartiste, Where’s Charley? and Pipe Dream.

“All of us at Starlight are delighted to bring this powerhouse team of creatives and performers back together to lead our production of Mary Poppins,” said Rich Baker, Starlight president and CEO. “This musical, which makes its Starlight debut in July, is annually one of the most requested shows on our audience survey, so we are committed to making it the best it can possibly be!”

All-new costumes for Mary Poppins are being created by Kansas City Costume Co., and a new set is being designed and constructed in collaboration with three other regional theatres across the country.