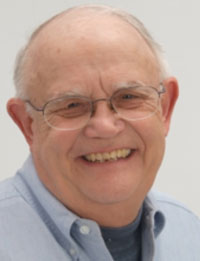 Steve Otto is a full time professional storyteller! He has been telling stories since 1985, full time since 1994. His degree is from the University of Missouri, in speech and dramatics. He has worked in Television and has acted and directed in over thirty roles in Community Theatre.

Steve tells over 200 programs a year to all age groups from nursery schools to nursing homes.

For four years he worked in television during the “live TV” days, and spent the next 30 years working for the government while acting, directing and producing in community theater. He started telling stories, and became a full time freelance teller in 1994. He tells stories to groups from Nursery School to Nursing Homes. His specialties are stories from the Ozarks, ghost stories, stories from literature, inspirational, and creative audience participation stories.

Steve found that Storytelling is much more than just spinning a yarn. His seminars range from teaching the basics of storytelling, business seminars on communications, and collecting the stories of our past, to teaching teachers how to use storytelling as a teaching tool.

Settle back and let you mind roam free . . . you will find that you will create pictures in that mind that you never imagined possible. You will remember events long forgotten, and venture into the world of STORYTELLING.