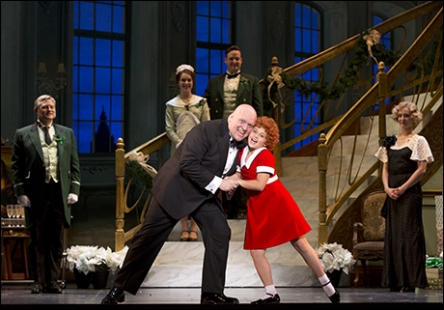 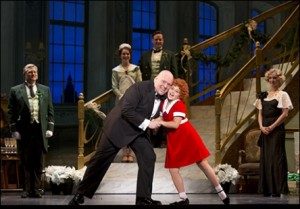 Leapin’ Lizards! Plenty of talented “orphans” will surely charm Kansas City audiences when the national tour of Annie stops at Starlight Theatre on June 19-21 for a Broadway weekend special engagement. This brand-new physical incarnation of Annie remains true to the show’s nearly 40-year traditions, including the beloved songs and themes of resiliency and optimism.

Martin Charnin, Annie’s original lyricist and director, directs the touring production – for the 19th time since the musical debuted on Broadway in April 1977. The show quickly became one of Broadway’s biggest hits ever, running for 2,377 performances, winning seven Tony Awards including Best Musical, seven Drama Desk Awards, the New York Drama Critics Circle Award for Best Musical, and even a Grammy for Best Cast Show Album. It has since been performed worldwide in 28 languages.

Starlight audiences will be transported back to New York City in 1933 where a little red-headed orphan, Annie, lives in an orphanage but is on a continuous search for her parents who left her there years before. After escaping the orphanage and having a few adventures on the streets of NYC, Annie is chosen to spend the Christmas holiday at billionaire Oliver Warbuck’s mansion. Warbuck soon learns to love the girl as his own and vows to help her in her search for her parents. The musical’s celebrated score features such audience favorites as “Maybe,” “It’s the Hard Knock Life,” “You’re Never Fully Dressed Without a Smile,” “Easy Street,” “I Don’t Need Anything But You,” and the eternal anthem of optimism, “Tomorrow.”

“I’m extremely pleased that Starlight is able to host this incredible production and wonderful cast,” Starlight president and CEO Rich Baker said.  “Annie is a musical that so many people have grown up with, and now they have a new opportunity to experience it with their family and friends. When that little redhead belts out the words to ‘Tomorrow,’ it fills you with a joy that few other musical numbers can match.”

Discount prices for groups of 15 or more are available by contacting group sales coordinator Staci Shute at 816.997.1137 or staci.shute@kcstarlight.com