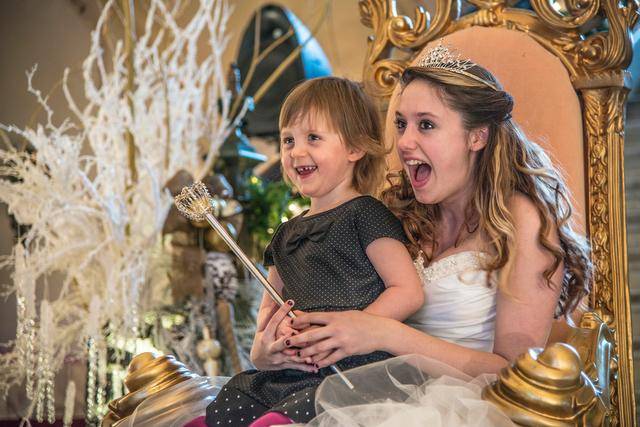 The Kansas City Museum closes the calendar year of its 75th anniversary in December with a Kansas City icon whose roots stretch even further back in the city’s history. It was 80 years ago that the Fairy Princess tradition was born, and for almost three decades, she has held reign over the museum’s December events.

For those few who are unfamiliar with the Fairy Princess tradition: each December, children from throughout the Kansas City area make the short pilgrimage to the Kansas City Museum to share their holiday hopes with the princess, as well as to enjoy stories, performances, and hands-on activities that have added to this uniquely Kansas City annual event. It is an experience today’s children share with their parents and grandparents, who in their turn, visited the Princess and made their own childhood wishes known.

From her beginning in 1935 at the Kline’s Department Store’s Toyland through the late 1960s, the Fairy Princess was a holiday highlight for Kansas City families. When Kline’s closed its doors in 1970, the princess disappeared from Kansas City’s holiday traditions.

For 16 years she lived only in the fond memories of those who had experienced her enchanting charm. Then in 1987, the Kansas City Museum gave the Fairy Princess a new home, reviving this treasured annual experience for current and future generations. Since 2006 she has also appeared annually at Zona Rosa Town Center, which, in partnership with the museum, has brought the Fairy Princess back to her retail beginnings.

Then during the first three Saturdays and Sundays in December, the Fairy Princess will hold court at the Kansas City Museum, just as she has done for the past three decades. She will greet her young visitors Saturdays from 10 a.m. to 4 p.m. and Sundays from Noon to 4 p.m. on December 5, 6, 12, 13, 19, and 20. Admission is $10 per child, and no reservations are necessary to continue – or begin – this magical tradition in your family. For more information, visit the museum online at kansascitymuseum.org and zonarosa.com.

The Kansas City Museum’s resurrection of this fabled Kansas City tradition is emblematical of the museum’s core mission as it prepares for the next 75 years and beyond. “The future Kansas City Museum will continue to collect, preserve, and interpret Kansas City’s local and regional history and heritage,” said Kansas City Museum Executive Director Anna Marie Tutera. “As the museum recreates itself over the coming months and years, it will serve as a hub of learning, discovery, and conversation where individuals and communities come together to explore and experience the city’s vibrant neighborhoods, unique traditions, and rich cultural legacies. Museumvisitors will make meaningful personal connections to the City’s history and heritage in unexpected and wondrous ways, and they will be inspired toward thoughtful citizenship.”

For a full listing of programming in November and December, visit kansascitymuseum.org.