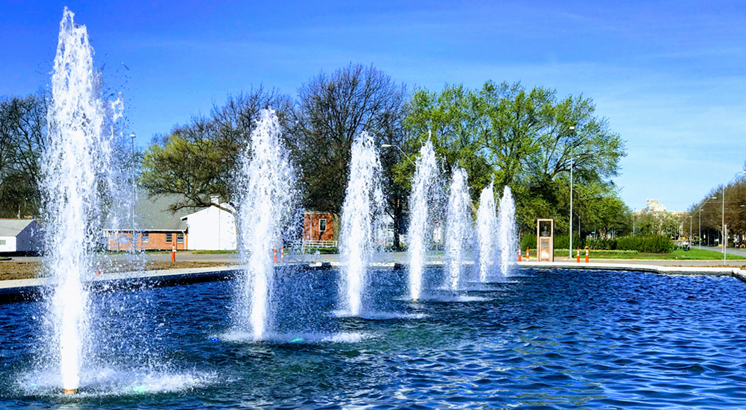 Celebrate the official start of the 2021 fountain season in the City of Fountains! Fountain Day is a Spring ritual and holiday unique to Kansas City.

ABOUT DELBERT J. HAFF
Delbert J. Haff (1859-1943) was a Park Commissioner from 1908-1912. As an attorney, he was largely responsible for solving the financial and legal problems facing the first Park Board.  A circle outside Swope Park was dedicated to this pioneer. The mirror pool was designed with a low retaining wall of coursed stone. In 1966, it was equipped with a center spraying ring and seven vertical jets that operate year round. This fountain welcomes visitors to the entrance of Swope Park and pays tribute to one of Kansas City’s most influential proponents of the local parks system.

FOUNTAIN RENOVATIONS
In 2019, improvements to the fountain were completed that included a new concrete basin to reduce the depth of the pool and reduce the amount of water it holds by 50%. Increasing the spray nozzles from 3 to 7, adding color LED lighting, installing new fountain equipment and a new vault to house the equipment, replacing the concrete walkway around the fountain, adding an ADA entrance on the east side, replacing the stonework around the edge of the fountain, and adding landscaping around the bust of Delbert Haff on the west side. The $1.5 million renovation project was funded by GOkc Bonds, City funds, and private donations through the City of Fountains Foundation.