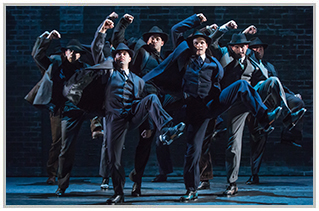 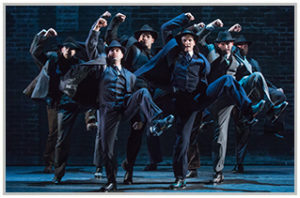 Things are about to get very interesting at Starlight Theatre as the national touring production of Bullets Over Broadway takes the stage later this month. This new musical comedy, written by Woody Allen and based on the screenplay by Allen and Douglas McGrath for the 1994 film, is sure to entertain audiences with over-the-top antics of gangsters, showgirls and aspiring playwrights. Bullets Over Broadway, which runs June 28-July 3, is the third of five Broadway musicals making their Kansas City premieres at Starlight this summer.

Bullets over Broadway tells the story of David Shayne, an aspiring young playwright newly arrived on Broadway in 1920s’ New York. Desperate to find financial backing for his next show, Shayne gets an offer he literally can’t refuse – from Nick Valenti, a mobster who forces him to cast his talentless showgirl girlfriend. Loaded with big laughs, colorful characters and songs that made the ‘20s roar, Bullets Over Broadway is bringing back musical comedy with a bang!

“This show will take Starlight audiences back to the days of classic Broadway with memorable characters, outlandish story lines and big song and dance numbers,” said Rich Baker, Starlight president and CEO. “If you’ve enjoyed shows like Guys and Dolls, Anything Goes and The Producers in the past, you have to see Bullets Over Broadway!”

The musical showcases existing music of the 1920s, including “Tain’t Nobody’s Biz-ness If I Do,” “Let’s Misbehave,” I’m Sitting On Top Of The World,“ “Runnin’ Wild” and more.

The original Broadway production of Bullets Over Broadway received six Tony Award® nominations in 2014, including Best Book of a Musical and Best Choreography. TIME magazine hailed it as “Musical Theatre Gold!,” while The New Yorker described it as “A Fun Machine from Start to Finish!”

Discount prices for groups of 10 or more are available by contacting group sales manager Staci Shelman at 816.997.1137 or staci.shelman@kcstarlight.com.

About Starlight Theatre
Starlight Theatre, a recent winner of the Venue Excellence Award from the International Association of Venue Managers (IAVM), is the largest and oldest performing arts organization in Kansas City and the second-largest outdoor producing theatre in the country. Opened as a theater in 1950 and as a not-for-profit organization in 1951, Starlight presents and produces Broadway musicals and concerts. It also offers extensive community outreach and educational programming, including classes, scholarships and Starlight’s Blue Star Awards, one of the largest high school musical theatre award programs in the nation. Located on 16 acres in Swope Park, Starlight’s venue includes rehearsal halls, gift store, club area for dining, concessions, gardens, fountains and a 10-story, climate-controlled stage. For more information, visit www.kcstarlight.com.