Ground Breaking for Native Sons and Daughters of KC Monument 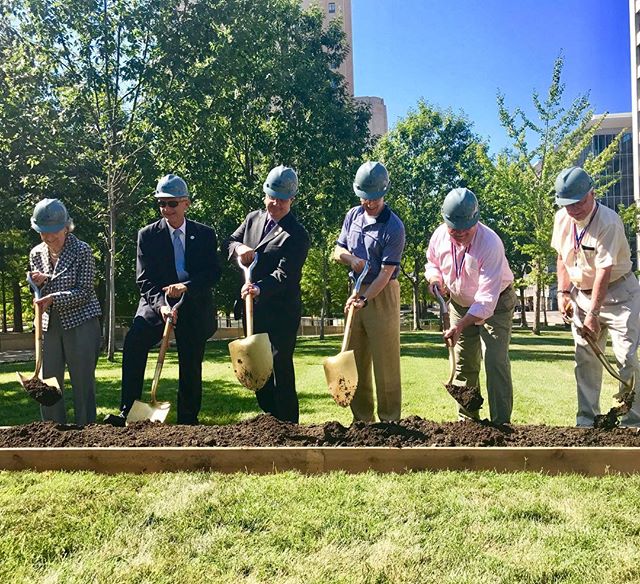 On Thursday July 20, a ground breaking for a new monument honoring of The Native Sons and Daughters of Greater Kansas City, Inc. (NSDKC) was held in Ilus Davis Park. NSDKC is an organization dedicated to the historic preservation of the unique and rich heritage of the greater Kansas City metropolitan area, both in Missouri and Kansas, through advocacy, education and restoration. The program featured NSDKC Event Chair Chuck Eddy, NSDKC President  Diane Boos Pepper,  NSDKC Monument Chair Carl DiCapo, KC Parks Director Mark L. McHenry and others.

The Monument is to be erected on the west side of the 5.2 acre Ilus Davis Park located north of City Hall. Community leaders across the region enthusiastically support this project. The Monument Project Committee, led by NSDKC Past President Carl DiCapo, includes members of NSDKC, representatives from J.E. Dunn Construction Co., and BNIM Architects, Inc.

A wayside exhibit will be located adjoining the plaza area describing the features of the Monument, including a description of the Monument’s design elements, recognition of significant project funding donors, and project committee members and sponsors.

Training Session This Saturday Who: Volunteers who have signed up for Kansas City’s Adopt a Monument Program What: Training for... Read More...

GoFundMe page to help with costs Under the cover of darkness on an early August night, thieves removed the 7-foot, 400... Read More...

It’s not every day that we get an NFL MVP to attend a city event. But everyone seemed to enjoy... Read More...