K9 Veterans Day is March 13: See Freedom Through Their Eyes 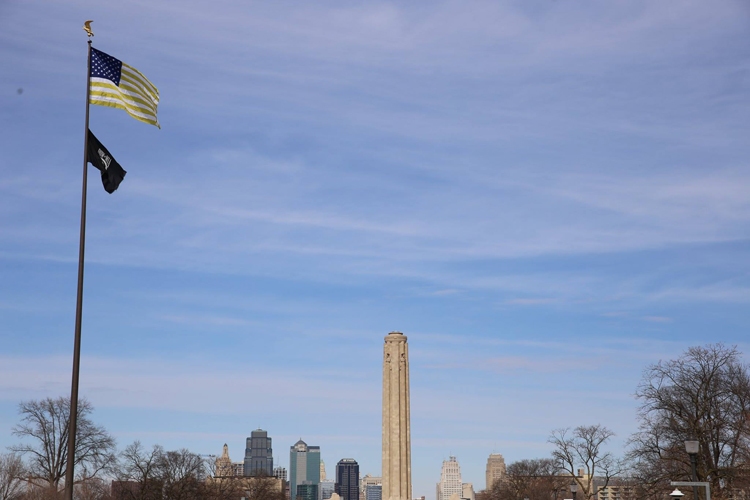 In observance of K9 Veterans Day on March 13, a commemorative flag will fly from dawn to dusk on the Mall of the National World War I Museum and Memorial. K9 Veterans Day honors the service and sacrifice of retired Military Working Dogs and Police K-9 Heroes. The K9 Veterans Flag is our nation’s flag re-imagined as dogs have always seen it. Since dogs only see in blues and yellows, through their eyes, this is the flag they serve.

On March 10, representatives of DreamBone®, the sponsor of the K9 Veterans Day activities, were in attendance at three KC Parks dog parks distributing K9 flags, K9 bandanas, and dog chews to honor our K9 corps.  That same afternoon, a public ceremony was held on the National World War I Museum and Memorial Mall to raise the K9 Veterans flag and honor retired K9 veteran, Jet Li (aka Knikker). 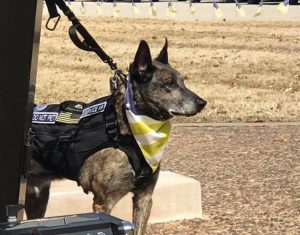 Jet Li completed two tours in Iraq in the Naval Special Warfare Gold Squadron where he sought out and apprehended High-Value Targets for the Department of Defense Special Operations Command along with countless narcotics finds. His  handler, Officer 1st Class John “Jet Li” Douangdara, was Killed in Action on August 6, 2011 in Afghanistan. Following retirement from the Military, Jet Li joined the City of Indianapolis as a Police K-9 where he had over 100 criminal apprehensions and countless narcotic related finds. After his second retirement, with the help of Project K-9 Hero, Jet Li was able to find a new home for life with the immediate family of the Military hero he was named after. More about Jet Li>>

Dreambone® also presented a $5,000 check to Project K-9 Hero whose mission is ensure each K-9 Hero is rewarded with health and the way of life that they deserve for their faithful and loyal service. More about Project K-9 Hero>>

KC Parks is proud to honor our K9 Veterans and see freedom through their eyes.