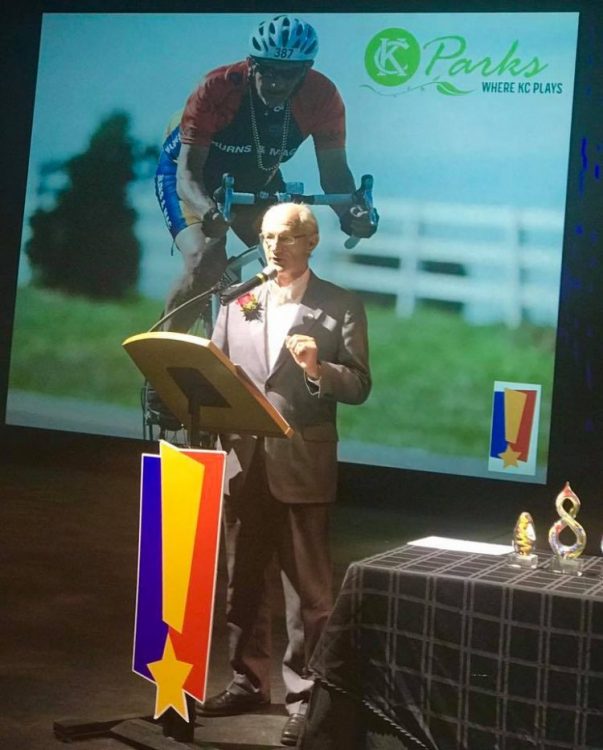 On November 7, KC Parks Director Mark L. McHenry  received the Heart of Kansas City Individual Achievement Award from the Greater Kansas City Attractions Association.  McHenry, who will be retiring at the end of 2018, was honored for going the extra mile to further the goals, objectives and spirit of the tourism and hospitality industry in Kansas City

Mark McHenry’s impact on Kansas City will last much longer than the 44+ years that he has spent with the City of Kansas City’s Parks and Recreation Department.

During his time with the city of Kansas City, he helped to add 34 parks and six new community centers. Also, the Kansas City Zoo doubled in size, Starlight Theater was revitalized and the current National World War I Museum and Memorial was created.

Mark earned his bachelor’s degree in park administration from Texas Tech University and his master’s in public administration from University of Missouri, Kansas City. He joined the staff of Kansas City, Mo., Parks and Recreation in 1974 as a municipal management trainee and has been a key member of the department since 1976, moving through the ranks of park district manager, superintendent of construction and development, and superintendent of parks management. In 1988 he became deputy director and has served as the department’s director since 2003. He is the seventh director to lead the departments since its establishment in 1892.

In 2017 he received the Arts Advocate Award from Arts KC for serving as the steward of Kansas City’s public monuments, memorials, sculptures and fountains.

Under Mark’s guidance Kansas City has been recognized by national and international organizations. In 2012, Ward Parkway was designated as one of 10 Great Streets by the American Planning Association. In 2016, “The Kansas City Parks and Boulevards Historic District” was officially listed in the National Register of Historic Places for its significance in Community Planning and Development and Landscape Architecture. In July of 2018, the Laura Conyers Smith Municipal Rose Garden received the World Federation of Roses Societies Triennial Conference Award of Garden Excellence.

In recent years, Mark worked to identify funds and navigate the challenges to develop, design and build Swope Soccer Village in partnership with Sporting Kansas City.  Following that same model, he helped develop the Urban Youth Academy at Parade Park in partnership with the Kansas City Royals Baseball organization. Both of these partnerships with professional sports franchises will benefit our community’s youth for decades and bring many large tournaments into Kansas City.

Mark has worked closely with Jackson County Parks and surrounding municipalities in the development of our trails system. The trails that have been developed will eventually link to the Rock Island trail which is under development now and will eventually link to the Katy Trail, allowing trail enthusiast to ride or hike from St. Louis to Kansas City, Mo.

Along with all of his other many duties, Mark also serves on the Zoo Board, Starlight Board, Liberty Memorial Association and the City of Fountains Foundation. Mark’s impact on Kansas City has touched millions of residents and tourists that come to Kansas City for a getaway or to enjoy great attractions in their own backyard.