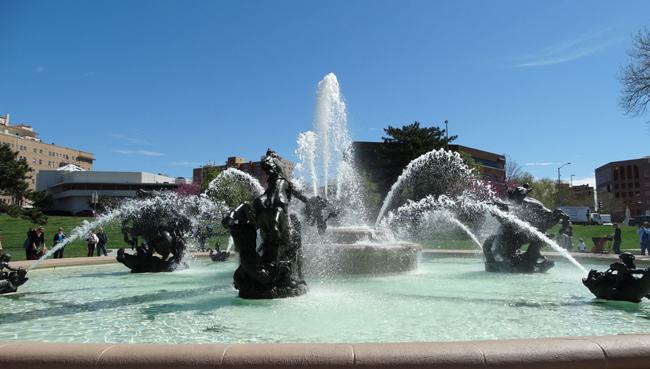 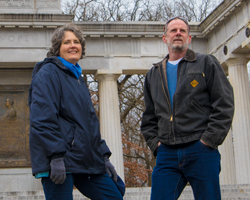 The care and repair of smiling children, snarling lions, creatures of the deep

When you’re famous, calls come from all over the country. Cincinnati wants to know the schedule for maintenance. North Carolina asks how the water is dyed. And Nashville enquires about restoration techniques.

Jocelyn Ball-Edson and Patrick McNamara often field such questions in their jobs as caretakers of Kansas City’s magnificent display of fountains as well as monuments, plaques and ornamentation.

It’s a hard-knock life for these outdoor art forms subject to the vagaries of weather, leaf and lawn debris, occasional vandalism and Father Time. The Parks and Recreation Department staff provide constant vigilance and care. Most of their efforts are aimed at regular cleaning, chlorinating, caulking and mechanical upkeep. But sometimes a major upgrade is needed.

Last year the J.C. Nichols Memorial Fountain, the city’s best known and most photographed, received a total makeover. The fountain’s nine sculptures were removed from its Country Club Plaza location for cleaning and waxing, and the concrete pedestals, basin and pumps were repaired. Now the focus is on the Children’s Fountain. Last fall the fountain’s six bronze figures captured in playful poses were removed by crane, placed on a flatbed truck and hauled from the Northland to storage while the basin and lighting is renovated. The figures should be reinstalled in time for the annual Fountain Day celebration on April 12. Other ongoing renovations include the Volker Fountain on Brush Creek and the Block Fountain at Union Station.

Ball-Edson, senior landscape architect, and McNamara, maintenance superintendent, say the City’s fountains have a range of requirements. Some use a lot of water, some just a trickle (nearly all are recirculating); 10 are kept flowing year-round and make beautiful ice sculptures or shallow skating ponds during winter months, but most are turned off in October; some invite algae growth and those near heavy landscaping collect pollen, leaves and fallen flowers. The larger fountains occasionally attract coins, tennis balls, and (ahem) diapers and underwear.

The Parks Department maintains 48 fountains plus another 115 or so monuments and ornamental decorations, but the City of Fountains Foundation counts more than 200 “public” fountains in the metro area, including structures owned by private institutions and other municipalities. So how does that number compare worldwide? Are we really second or third highest, as often claimed?

Art was her first interest before becoming a landscape architect, and she still enjoys that aspect of the sculptures and monuments when she solicits advice on their care from the Nelson-Atkins Art Museum, the Smithsonian Institute and other centers of expertise. Most of the restoration work is done by contractors and professional conservators, but McNamara oversees daily maintenance, repairs and water dyeing (created by Blue Valley Laboratories specifically for Kansas City).

While the fountains and monuments are decorative, the most interesting thing is that each tells a story—about sons and daughters lost during war, popular city leaders, everyday heroes and fantastic beasts from world mythology.

“The history behind them is intriguing,” says McNamara, who is especially fond of the Thomas Swope Memorial and the serene, sweeping view from its hilltop grounds. Ball-Edson likes the familiar sculptures, of course, but also the lesser known pieces like a snarling lion’s head at Observation Park in the Westside and an abstract stainless steel formation at 16th Street and Paseo that honors a high school student killed while preventing a robbery.

Sometime she’d like to publish a series of fountain and monument brochures based on themes: children, dogs and horses, angels and cherubs, and such. “I’d tell how they got there, why and who built them,” she says.

It would be an ongoing project—she knows that much. “On the table right now are three new fountain proposals. There’s no shortage of ideas and creativity in Kansas City,” she says.

Reprinted from the City of Kansas City, Missouri’s employee newsletter, The Fountain Pen.