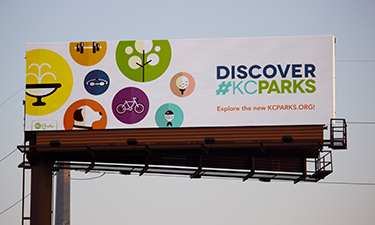 Published in the February 2014 issue of Parks & Recreation Magazine

In August of 2012, the citizens of Kansas City, Missouri, passed a sales tax in support of Kansas City Parks and Recreation, a CAPRA-certified agency. Among other benefits, the tax explicitly called for funding revamped parks marketing materials and an updated website. As a result, the agency’s marketing department initiated a major rebranding campaign in the first quarter of 2013 — the first in more than five years. 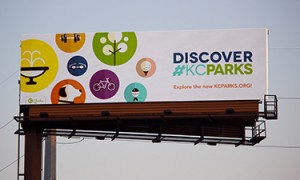 The rebranding process included a completely redesigned website from the ground up; new print collateral; ad placements on everything from buses to billboards; enhanced social media efforts; and public relations for print, television and radio editorial. The process was completed in late spring of 2013, just in time for NRPA’s annual celebration of Park and Recreation Month in July.

To highlight the monthlong celebration of America’s parks and to supplement the efforts of the rebranding process, the Kansas City Parks and Recreation marketing team initiated the “Park It Forward” campaign to drive additional traffic to the new website and its social media platforms via posts of myriad park activities.

For each day of Park and Recreation Month, a corresponding “Adventure of the Day” was assigned that suggested a park-centric activity or facility. For instance, July 1 stated, “Have a million gallons of outdoor water fun at the Springs Aquatic Center in Tiffany Hills Park.” Each morning, the caption would be posted to Facebook and Twitter. In the afternoon, a team of park and recreation staff and summer interns would surprise random individuals around the city with a variety of prizes consistent with the day’s theme.

The prizes ranged from tickets to outdoor theater performances, tennis court time, cycling gear, golf balls — even dog treats. The recipients would have their picture taken on the spot and that image would be posted to the department’s social media outlets (Facebook, Instagram and Twitter) and hashtagged with #ParkItForward and #KCParks. Posts were a clear visual representation of Park and Recreation Month and all that Kansas City Parks has to offer.

The public quickly warmed to the campaign and began to like, comment and share the Park It Forward posts on social media. The new website, which had gone live in June, also received increased attention. By the end of July, Kansas Citians were regularly checking the Adventure of the Day, generating some of the highest site traffic and viewed posts on the agency’s social media pages to date.

The Park It Forward campaign was highly successful for several reasons. First, it utilized social media platforms to a degree previously unprecedented for Kansas City Parks and Recreation. Facebook, Instagram and Twitter all saw significant increases in the amount of interactivity among followers both old and new. Second, it was effective in educating the public about the new website and the diversity of Kansas City’s parks and corresponding facilities. Finally, Park It Forward was a positive initiative for Kansas City, Missouri, Parks and Recreation because it reiterated the sentiment that parks and recreation is a resource designed to generate increased community among the city’s residents.