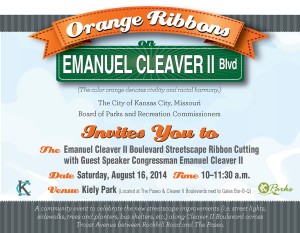 WHERE: Kiely Park, located at the intersection of The Paseo and Emanuel Cleaver II Boulevards, next to Gates Bar-B-Q

MORE: Orange Ribbons on Cleaver Boulevard, utilizing the color orange in honor of the spirit of the boulevard’s namesake, Emanuel Cleaver II, who believes “there is more power in unity than division”. The color orange is said to represent cultural diversity, racial harmony and civility. Decorative Orange Ribbons will be placed on street light poles in the area in honor of the event.

CONTACT: Carrie Stapleton, Phillips-West Public Relations, 816.419.2877,carrie.stapleton@phillips-west.com,  if you are interested in live interviews earlier in the morning or for photo opportunities.