Keeper of the Roses: Judy Penner 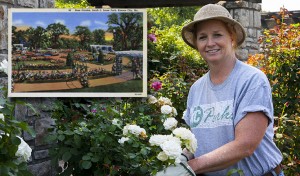 Whether it’s a bride-to-be worried about construction near the pergola, a homeless man fast asleep on a concrete ledge, a fallen oak tree limb across a sidewalk or two parties arguing over the picnic shelter, Judy Penner is the one they go to.“I have my hands in a lot of things,” she says. “It’s a big customer service job.”

Penner joined the City as a landscape technician when she was hired to care for several thousand rose bushes at Loose Park. Now, 26 years later, she’s kept the same title but added the responsibility of managing the entire 75-acre grounds, buildings and staff. She also supervises the contractors who mow and fertilize, and keeps up with the Kansas City Rose Society and other plant groups that help fund and maintain the flower beds. Last spring the Gardeners Connect selected her as their Arbor Day Honoree, and the Parks and Recreation Department twice has named her supervisor of the year.

Penner, who has a degree in horticulture from the University of Missouri-Columbia, enjoys the variety that comes with her position, but still likes tending roses best. “My favorite thing is to get out in the garden and prune and tie up climbers,” she says.

Located just west of the Country Club Plaza at 51st Street and Wornall, Loose Park is one of the City’s favorite destinations. “On Saturday and Sunday you’ll have trouble finding a parking spot,” notes Penner. “There are a lot of people who really love this park.”

Some of those people include engaged couples who reserve an outdoor wedding date a year in advance, volunteers who help tend the roses and annual beds and hold meetings in the garden center building, joggers and dog walkers who use the rubberized running path around the perimeter, and drummers who gather by the turnaround to beat out rhythms and dance on Monday evenings.

The park began in the early 1930s when Ella Loose donated the land to honor her husband Jacob. A group of citizens led by Laura Conyers Smith planted a modest rose garden with one type of rose. Now there are 55 varieties circling a fountain, plus an azalea garden, a fragrance and texture garden, a Japanese garden and annual beds. There also are tennis courts, a children’s spray area, a playground, a duck pond with three bridges and a Civil War monument where the Battle of Westport, one of the war’s bloodiest, took place (Civil War bullets have been found embedded in some of the trees).

Because of its high visibility, Penner and her staff spray the roses every 10-14 days during the growing season for black spot and other diseases. “I’d like it to be all natural, but we have to keep it looking good all the time,” she says. The park does get many admiring comments on Trip Advisor and Yelp, and pre-Internet in 1989, the Rose Garden won a national award from the American Rose Society. During that same period, Penner gave birth to twins, a boy and a girl. “That was a good year,” she remembers.

Improvements are always ongoing. In 2002 through a partnership with the Rose Society the park gained new fountains, walkways and an irrigation system. In 2009 Penner and her staff removed 2,000 roses and later replanted them to accommodate new granite paths and a drainage system. This year the Rose Society is funding the restoration of the pergola, replacing rotted wood with clear cedar.

Once some British visitors told Penner that the rose garden was the most beautiful they had ever seen. “They were from England!” she marvels. “That’s where beautiful roses are everywhere.”