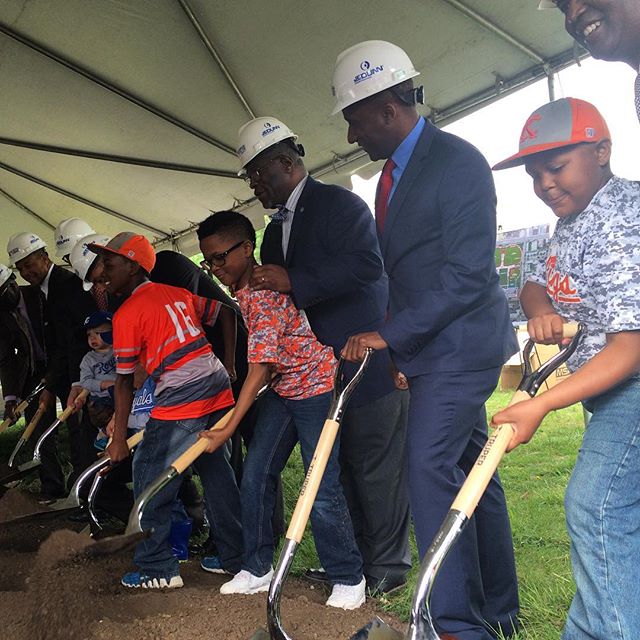 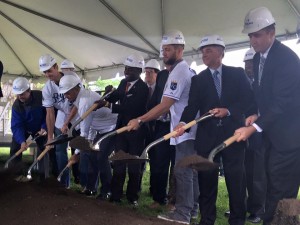 Announced in September, the planned $14 million project will include an indoor training facility, three state-of-the-art baseball fields and one softball field to enhance the 18th and Vine District. Kansas City-based firms, Populous and JE Dunn, will serve as the lead architects and contractors for the project. Today’s groundbreaking officially begins the construction of Phase 1, which is scheduled to open in the Fall. The continued success of the Phase 2 fundraising campaign could potentially allow for the Academy to be fully operational by the summer of 2017.

“As the father of a son who played baseball, I understand first-hand the ways that this game can give a young person a sense of direction. It can help them develop a strong work ethic while also learning what it means to be part of a team.” said Mayor Sly James. “As Mayor, I couldn’t ask for a better project to positively impact the lives of our City’s youth and help revitalize one of our City’s most historic districts.”

The Kansas City MLB Urban Youth Academy’s initial goal will be to serve approximately 800-1,000 youth, ages 6-18, per year. In addition to providing free, year-round baseball and softball instruction, the Academy will provide youth access to educational and vocational programs.

“The Kansas City Royals are deeply committed to growing the great game of baseball in our community and throughout the region,” Moore said. “The Kansas City Urban Youth Academy will provide special opportunities for boys and girls to develop their baseball and softball skills while, most importantly, growing as leaders.”

This project will enhance Parade Park for neighbors and support the existing efforts of MLB to attract more youth to the game, particularly through the MLB Urban Youth Academy network. The Academy will partner with the Boys and Girls Clubs of Greater Kansas City to help support the local Reviving Baseball in the Inner Cities (RBI) programs and youth baseball initiatives around the area.

“Major League Baseball is proud of our role in bringing the Urban Youth Academy project to this point,” said Reagins. “We believe this facility will provide a safe haven for young people to grow as individuals and ballplayers, and will be a tremendous source of pride for the community.  We thank the Royals, Governor Nixon, Mayor James, the City of Kansas City and the MLBPA for their dedication and partnership in this effort.”

The Kansas City MLB Urban Youth Academy is among nine Urban Youth Academies either in development or fully operational in the United States. The cities of Cincinnati (OH), Compton (CA), Houston (TX), New Orleans (LA), Philadelphia (PA) and Washington, D.C. all have operational Academies; while Kansas City is joined by Dallas (TX) and San Francisco (CA) as cities with Academies in development.  The Kansas City Royals, the Glass family and local charitable support will provide personnel and cover all of the Academy’s operating expenses including equipment, supplies and utilities.

The Academy and park improvements will be developed in two phases:

●   Phase I includes three baseball fields; one softball field; a walking trail with views of the baseball and softball diamonds; relocated basketball courts; relocated and renovated tennis courts and a relocated playground near the community center.

●   Phase II includes the indoor training facility with a turf infield, batting cages, pitching mounds, restrooms and concession facilities for the diamonds; a Great Lawn that will serve as a front yard and shared event space for the Academy; and additional parking. Phase II is contingent upon the success completion of a fundraising campaign.

Weather permitting, mobilization is scheduled to begin on site next week with the site clearing planned for May 11 and the mass excavation planned for May 16. The turf for the fields is planned to be installed mid-to-late July and the completion of Phase 1 is scheduled for early November.