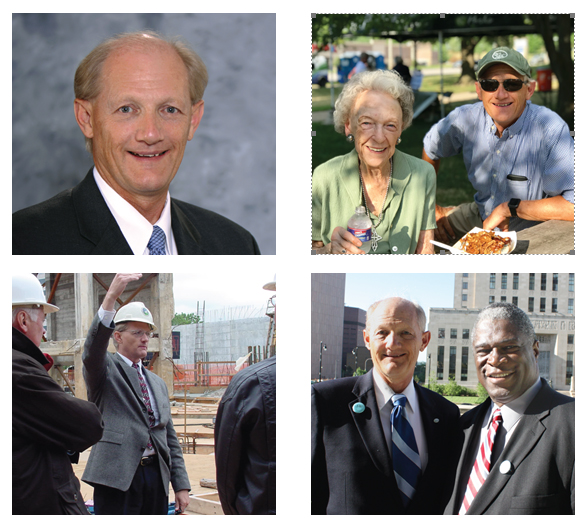 First fifteen years, Learning the Ropes
I came to Kansas City, Missouri in the spring of 1974 and started my career as a Municipal Management Trainee in the Parks and Recreation Department. I was hired by Jerry Darter, Park Superintendent and Frank Vaydik was the Director. I worked as a crew leader mowing grass, cleaning parks, and plowing snow on the city’s boulevards and parkways. It was a great chance to learn what makes a great city park system work by driving around the city to inspect parks.

I learned how to build fiberglass playground equipment in the shapes of huge animals from Vernon Jones for the Penguin Park playground. I cut logs to for log cabins, old barns, a church and other structures to create the village at Shoal Creek Living History Museum in Hodge Park.

As Kansas City’s northland expanded, we developed and built a large city golf course, which created opportunities to learn about turf management, irrigation plans and paving cart paths. That led to a position managing the Golf Division, with four golf courses. My management opportunities increased when I was placed at the helm of the Building and Structures Division, overseeing the men and women in skilled trades and eventually moving to overseeing the Park Maintenance Division of the department.

Second Fifteen Years, Deputy Director
Development and construction are the key words for the next phase in my career.

In addition to the golf courses, several new fountains came to life during this period and I was proud to help get the funding, design and development to create beautiful places for people to gather. This includes the Children’s Fountain, the Firefighters Fountain and Memorial, and the Women’s Leadership Fountain. Other fountains developed and funded at this time were the Helzberg and Steadman Fountains at Starlight Theater, which contribute beauty and cool sprays of water on hot summer evenings at a premier music and theater venue. I was also given the privilege to help design and oversee the construction of the Davis Civic Mall Fountain and Park, across from City Hall.

One of the oldest and the largest parks in the city had a “rebirth” as a destination in the city during this period. KC Parks led the effort to create funding for the zoo revitalization project. This effort included design, development and construction to build new exhibits and update facilities to make it a world class education and recreation family venue. This past year, the zoo had a record attendance of more than one million people. During the past seven years I have served as the Secretary/Treasurer on the Zoo Tax Commission, which administers funding operations and new exhibits. Other attractions in Swope Park where I served in the role of Project Manager were the new Lakeside Nature Center, the Tom Watson Golf Academy/Heart of America Golf Course, the new Equestrian Center, and the Starlight Theater stage house.

The Liberty Memorial was crumbling and closed to public viewing in the early 1990’s, when we worked with Park Board President Ollie Gates to head up private-public efforts to identify funding, develop, design, and refurbish the existing monument, and build a new museum  honoring the sacrifices of mankind in the “War to end all Wars”.

The Parks and Recreation headquarters, in Swope Park flooded in 1993 when the Blue River overflowed. The building never recovered and we were forced to move. Fortunately, we were able to purchase the former Burns and Mac building just to the west on 63rd Street.

In January 2002, the Kansas City area suffered a crippling ice storm that brought the city to a standstill. I served as lead official working directly with City Manager Bob Collins, and Mayor Kay Barnes for several months to coordinate all city departments, utility companies and federal and state agencies working to clean up storm damage and restore power to the city. I received the American Society of Public Administration Crisis Management Award for my service during this time.

Last Fifteen Years, Director
My work, along with other team members, privatized the Kansas City Zoo and the National World War I Museum at the Liberty Memorial, an initiative which successfully brought together public and private funds and expertise. We also followed national best practices to develop park conservancies here in Kansas City, which leverage private investment in public parks.

One of the top priorities for former Deputy Director Steve Lampone, and myself, was to find a new home for our Central region.  We were able to accomplish that when we moved from 39th and Gilliam to a new facility on West 9th Street.  Summers in Kansas City are hot and humid, so swimming pools and spray parks are important amenities for our residents. We worked out a land swap with a private developer to acquire Tiffany Springs Park and build the Springs Aquatic Center. In addition, we worked with the YMCA of Kansas City to build the Bay Aquatic Center in south Kansas City and most recently we acquired the Clay-Platte YMCA property on Vivion Road to build the Gorman Park fifty-meter swimming pool. We also built several spray grounds throughout the city.

We expanded Kansas City’s world-famous boulevard and parkway system into the rapidly growing northland with Shoal Creek Parkway, Maplewoods Parkway, Tiffany Springs Parkway and Chouteau Parkway. Years of hard work went towards developing and gaining City Council approval for new Boulevard and Parkway Standards to help preserve and protect the integrity of the park and boulevard system. With our new standards in place, it was determined by the park board that historical preservation was a critical part of maintaining the integrity of our original system. Maneuvering through a multi-step process we were able to get the original park and boulevard system listed on the National Registry of Historic Places by the National Park System, Department of the Interior.

Kansas City is known as the City of Fountains, rivaled only by Rome.  Restoration of several iconic fountains became a critical need. We worked creatively to partner with The City of Fountains Foundation to make renovations and repairs to eight of these beloved fountains.

Following the Metro Green Plan, in 1991, we developed, with the American Society of Landscape Architects, a plan to expand our linear park and trail systems.  I now serve as the Missouri Chair of the Bike/Pedestrian Committee at Mid America Regional Council, working to increase the miles of bike lanes, more trails and pedestrian friendly roadways.

In 2004, following a successful general obligation bond referendum, I took the lead to build a new Southeast Community Center, the Core Museum Exhibit at the Liberty Memorial and major exhibit improvements at the KC Zoo.

During my nine-year term on the board of the First Tee /Junior Golf Foundation of Kansas City we were able to expand programs for many young people and bring the headquarters of the organization to Swope Park.

We negotiated a partnership with Children’s Mercy Hospital, for Hospital Hill Park and the Ronald McDonald House Charities with Longfellow Park; to allow for major park projects to benefit the communities they serve.

I led the charge several times to ask the voters for approval to dispose of underutilized park land that resulted in new revenue sources to benefit existing parks. This is important from a social equity viewpoint, as we have been able to condemn or purchase land that was being used for a purpose that was counterintuitive for community stabilization and turn it into public green space. Examples include the Chouteau Parkway, Little Blue Valley Park and the Paseo Gateway projects.

Following my year of serving as President of the Missouri Parks and Recreation Association, I had the opportunity to chair the legislative committee, where we have worked with our elected officials to advocate for, pass, and sign into law several important state bills.

In 2012, the voters again showed their trust in Kansas City Parks and Recreation with approval of a half-cent sales tax to provide long-term stable funding for the department. Revenue today from this sales tax generates approximately $35 million.

In recent years, I was able to work with former Mayor pro tem Cindy Circo to identify funds and navigate the challenges to develop, design and build the Soccer Village in partnership with Sporting Kansas City.  Following that same model, I worked closely with Mayor James to develop the Urban Youth Academy at Parade Park in partnership with the Kansas City Royals Baseball organization. Both of these partnerships with professional sports franchises will benefit our community’s youth for decades.

I have been able to develop partnerships with Platte County for the acquisition and development of park land and facilities for the formation of the Platte County Sports Commission with one mission to improve youth sports in Kansas City and Platte County. I am proud to serve as the current President.

I currently serve as the treasurer of the Enshriners Fraternity and am especially proud to help raise funds for several projects that benefit the urban core. These include the Spirit of Freedom Fountain, Satchel Paige Memorial Stadium, Bruce R. Watkins Cultural Center, Sheila Kemper Dietrich Park with its barrier-free playground, and the Buck O’Neil Research and Educational Center, formerly known as the old Paseo YMCA.

It has been an enjoyable career, and I look forward to enjoying our parks and boulevards as a retired resident.  Mark L. McHenry