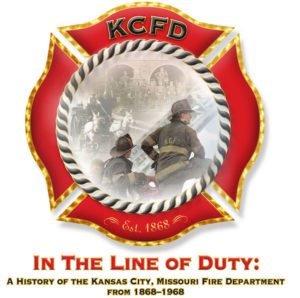 In the Line of Duty will focus on the first 100 years of the KCFD, from 1868-1968, and is presented by the Kansas City Museum in collaboration with the Kansas City Fire Historical Society (KCFHS), led by its president Paul Ferguson and curated by KCFHS historian Ray Elder—a retired KCFD Captain. Featuring historical objects and archival materials from the collections of the Kansas City Museum and the KCFHS, as well as items on loan, the highlight of the exhibition will be a restored 1927 Ahrens Fox fire truck from the KCFHS.

An exhibition opening reception for the public will be on Friday, October 14 from 6:00 to 7:00 p.m. At this reception, Northeast News Publisher Mike Bushnell will unveil and dedicate a permanent memorial to fallen firefighters John Mesh and Larry Leggio, who died in a structure fire after a building collapsed in this Historic Northeast on October 12, 2015. The memorial is imported Black Indian Granite measuring almost four feet square and weighing 700 pounds. It will be laser etched with images of both Mesh and Leggio and will bear their badges with numbers as well as a short dedication to both firefighters. The project was undertaken by Mike Bushnell, who covered the fire, General Manager of Snyder’s Supermarket, Pence Enterprises, and IAFF Local 42, and other local businesses.

In the Line of Duty runs through March 25, 2016. Self-guided exhibition tours are 10:00 a.m. to 4:00 p.m. Wednesday-Saturday at the Kansas City Museum. For more information, visit kansascitymuseum.org.