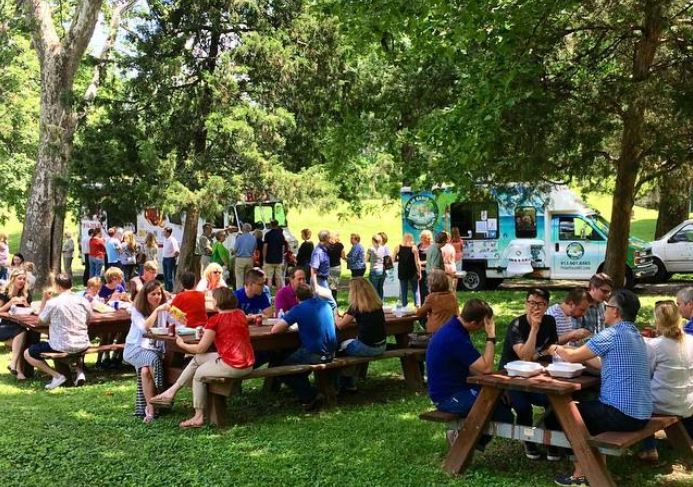 PorchFestKC and the KC Parks will celebrate Make Music Day on Friday with food trucks, live music in Union Cemetery

To kick off this year’s event, PorchFestKC is partnering with Food Truck Friday for a special preview as part of Make Music Day on June 21st. This kickoff celebration will take place from 11:00 am – 1:30 pm and feature music by The Julie Major Trio on Sexton’s Cottage porch in Union Cemetery. Union Cemetery will also be participating in PorchFestKC for the first time this October.

PorchFestKC returns for its fifth year on October 12, 2019. Three neighborhoods are participating in the event including Roanoke, and for the first time, Longfellow and Union Hill. Hosts open their porches as stages for musicians and attendees wander from front yard to front yard with camp chairs. The festival features 150 bands from around the region and all musical styles. The festival is held from 12:00pm to 6:00 pm and is free to attend. Attendees are encouraged to ride their bikes.

Applications for bands and porch hosts interested in participating open on July 1st and continue through July 31st at PorchFestKC.com.

About PorchFestKC
PorchFestKC is a community music celebration that brings music from more than 100 regional bands to the front porches of Midtown Kansas City homes. Bands perform acoustic, or near-acoustic, on the porches and play for tips. Festival goers bring camp chairs and wander from porch-to-porch at their own pace listening to music from front yards. Prior year events have taken place in the West Plaza (2014-2015), Valentine (2016), Roanoke (2016-2017) and Volker (2017).

About Make Music Day
Make Music is a free celebration of music around the world on June 21st. Launched in 1982 in France as the Fête de la Musique, it is now held on the same day in more than 1,000 cities in 120 countries. Completely different from a typical music festival, Make Music is open to anyone who wants to take part. Every kind of musician — young and old, amateur and professional, of every musical persuasion — pours onto streets, parks, plazas, and porches to share their music with friends, neighbors, and strangers. All of it is free and open to the public.