One-Man Star Wars Trilogy Will Take Starlight Indoors Audiences on a Fun, Frenetic Trip to a Galaxy Far, Far Away 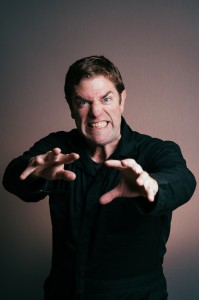 Created and brought to life on stage by Canadian actor Charles Ross, One-Man Star Wars Trilogy is just what it seems – a live solo performance of the original trilogy of Star Wars movies (A New Hope, The Empire Strikes Back and Return of the Jedi)! The multi-talented Ross stuns audiences by singlehandedly playing all the characters, singing the music, flying the ships, fighting the battles and condensing the Star Wars plots into just over 60 minutes of live entertainment.

Convinced that he has the best job in the world, “professional geek,” Ross has delivered his rapid-fire recap more than 4,000 times to audiences in 500 cities across four continents over the past 15 years.

It all began at the age of 6 when Ross saw Star Wars with his father. When he was later able to tape the movie on his family’s VCR, he would wake every morning at 5:30 a.m. to watch it. At the University of Victoria, Ross befriended T.J. Dawe; the duo soon collaborated on the creation and arduous rehearsal of many treatments of what would become One-Man Star Wars Trilogy.

With Ross performing and Dawe directing, the show made its Toronto Fringe Festival debut in 2002. It toured to Orlando, Fla., Vancouver, B.C., and Chicago. Then, in 2005, the show hit a high point – a performance at Star Wars Celebration III in Indianapolis for an audience of 35,000 ecstatic fans in Indianapolis.

One-Man Star Wars Trilogy is recommended for Star Wars fans of all ages. It plays in the intimate, indoor performance space of the Cohen Community Stagehouse at Starlight on Jan. 26-31. Weeknight shows begin at 7:30 p.m. Two performances are offered on both Saturday and Sunday at 3 p.m. and 7 p.m. Self-parking is free for all shows, and valet parking will be offered for $10.

Tickets for One-Man Star Wars Trilogy at Starlight Indoors can be purchased at www.kcstarlight.com, by calling 816.363.STAR (7827) or at the Starlight box office at 4600 Starlight Road, Kansas City, MO 64132. Ticket prices begin at $25; a limited number of VIP ticket packages, which include premium seats and valet parking, are also available. Discount pricing for groups of 10 or more is offered through Starlight’s Group Sales department at 816.997.1137 or groups@kcstarlight.com.

NOTE: Audience members are invited to wear costumes, but no masks or weapons are allowed.

About Starlight Theatre
Starlight Theatre, winner of the 2013 Venue Excellence Award from the International Association of Venue Managers (IAVM), is the largest and oldest performing arts organization in Kansas City and the second-largest outdoor producing theatre in the country. Opened as a theater in 1950 and as a not-for-profit organization in 1951, Starlight presents and produces Broadway musicals and concerts. It also offers extensive community outreach and educational programming, including classes, scholarships and Starlight’s Blue Star Awards, one of the largest high school musical theatre award programs in the nation.