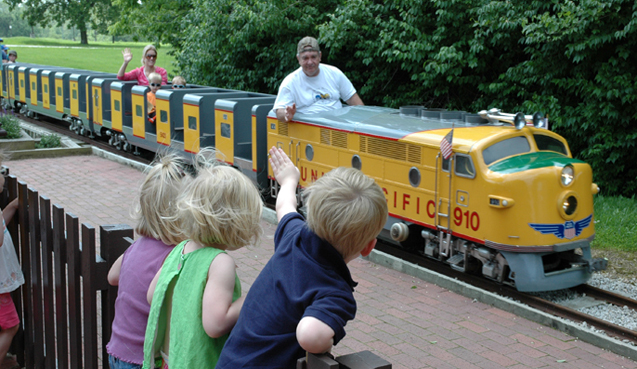 The Kansas City Northern Railroad is an all volunteer, not for profit organization operating in partnership with KC Parks.  The group was formed in 1984 when Kansas City Parks and Recreation asked for volunteers to restore and operate the former Kansas City Zoo train that had been retired from operation at the Zoo in Swope Park.

Kansas City Southern No. 31 (the red train, named the Southern Belle) is the oldest of the three.  It entered service at the Kansas City Zoo in 1953.  The train ran in Swope Park until 1972 when it was retired and was then stored until 1984.  After complete restoration by the volunteers, this was the first train to operate on the Kansas City Northern when operation commenced in July 1992.

Union Pacific No. 910 (the yellow train, named the City of Kansas City) is the second oldest.  It was one of two given to the city of Pittsburg, PA by the Mellon banking family. The first began operating at the Pittsburgh zoo, in 1955.  It later migrated to the city park in Manhattan, KS. The other train is reported to be in Washington state awaiting restoration.  The Kansas City Northern obtained the train after it was retired in Manhattan.  It was subsequently fully restored and placed in operation on the Kansas City Northern. The train was sand blasted and repainted in the Kansas City Northern paint scheme. It was finished in time to operate at the end of the 2012 season.

Missouri Pacific No. 651 (the blue train, named The Eagle) is the youngest of the three.  It first operated at the Ross Park Zoo in Binghamton, NY in 1963.  It was retired in 1986 and stored outdoors for many years.  The Kansas City Northern purchased the rusted hulk in 2001.  After extensive restoration, it was placed in service in 2005.

You can experience these trains in person at a celebration for National Train Day & 20th Anniversary of KCNRR on Saturday, May 11. From Noon-4 p.m. enjoy a giant inflatable train, face painting, live music, crafts with Macaroni Kids Northland, a caricature artist, and the Kansas City Zoomobile. Food will be available for purchase from the Chartroose Caboose.  PLUS the Line Creek Creek Ice Arena, also located in Frank Vaydik Park, will offer 2-for-1 ice skating from 2-4 p.m.  All aboard for fun!