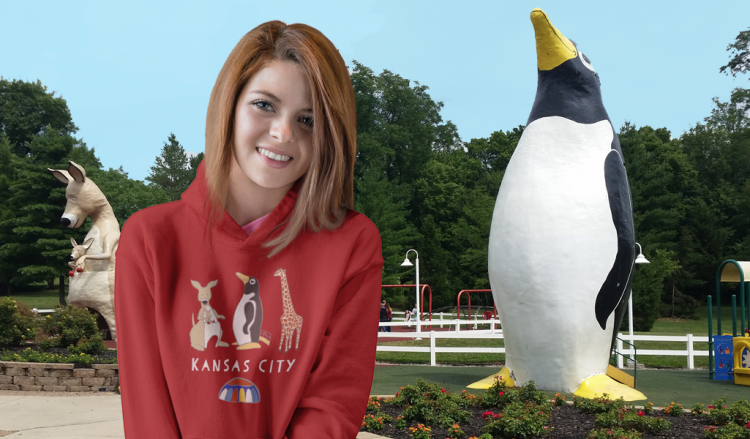 Show your Penguin Park pride and support the park at the same time! Local artist Kevin Worley has partnered with KC Parks and designed some great merchandise featuring the iconic penguin, kangaroo and giraffe located at the ever-popular Northland park. Even better, a portion of sales from the merchandise will be donated to KC Parks for Penguin Park improvements and maintenance.

Items ranging from coffee mugs and hoodies to onesies and T-shirts are available online. Each item features your choice of one or all three of the animals with the old merry-go-round and, in many cases, the KC Parks logo!

About the Artist
Kevin Worley grew up in Kansas City’s Northland, where he enjoyed many trips to Penguin Park with his siblings and friends. After graduating from North Kansas City High School and the Missouri School of Journalism, he worked for more than 20 years in publishing, marketing communications, and video production. Following that, he spent five years teaching art in the North Kansas City School District before pursuing his own artistic and entrepreneurial ventures, including setting up his online store, and his art studio in the Bunker Center for the Arts in downtown Kansas City.

Worley had long had the idea to create some sort of artwork based on the iconic characters from Penguin Park. Last fall, he finished two paintings—one of the penguin and one of the kangaroo—which now hang in his youngest niece’s bedroom. Re-creating the acrylic paintings as digital artwork allowed him to use the designs on T-shirts and other items that he sells on his website.

He plans to continue to paint and draw and create inventory for his fine art and illustration career—which could possibly include more artistic interpretations of Penguin Park. We hope so!

The south area of the park is currently undergoing Phase II improvements that include new toddler play equipment and safety surfacing. In addition, new picnic tables, trash receptacles, ornamental fencing, LED lighting and drinking fountains will be installed along with repairs to the fiberglass animals.

On this Dr. Martin Luther King Jr. Day, KC Parks celebrates an amazing transformation of the park named after the... Read More...

The City of Kansas City, Missouri Parks and Recreation Board of Commissioners has awarded Gunter Construction the design-build contract for... Read More...