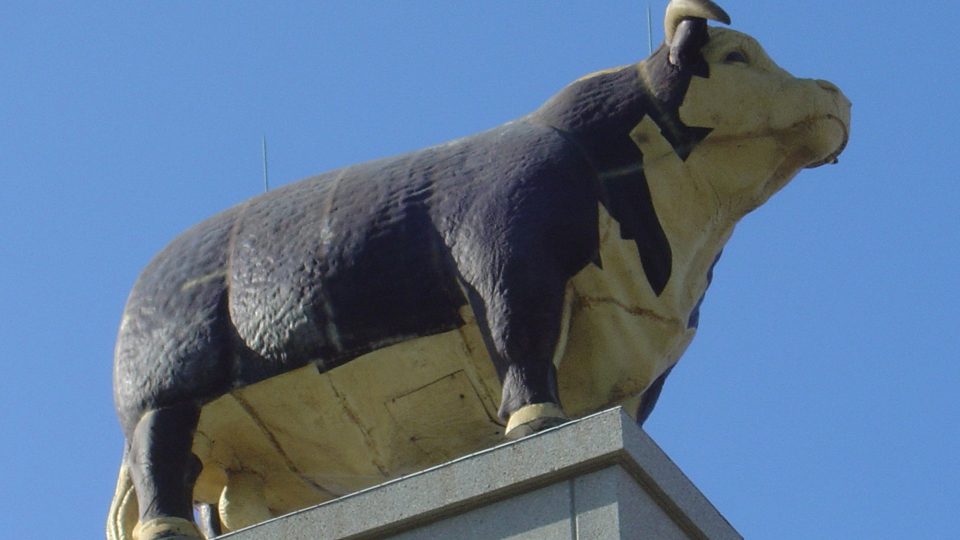 One of the more unusual sculptures connected to Kansas City Parks and Recreation is a 5,500 pound fiberglass Hereford bull replica that resides in Mulkey Square.  It is 11 feet, 8 inches tall.  From nose to tail, it spans 19 feet, 7 inches, and is 4 feet wide between the tips of its horns.  He has no official name but has sometimes been known as “Bob” for “Bull On Building.”

In October 1953, President Dwight Eisenhower attended the dedication of a new national headquarters for the American Hereford Association building at 715 Kirk Drive in the Quality Hill area.  The Association, founded in 1883, had previously been located at 300 W. 11th St.  The planned design for the new building, done by Joseph Radotinsky of Kansas City, Kansas, included a bull statue.  His lead architect Robert Manos came up with the idea, which Radotinsky supported.  The bull was created for the American Hereford Association by Paul Decker with the firm Rochetti and Parzinin of New York.  It was made at Colonial Plastic Corporation of Newark, New Jersey.   In October 1954, the Hereford Association placed the bull on a 90-foot pylon by its new headquarters.

Hereford cattle originated in Herefordshire, England and are thought to be descendants  from small red cattle of Roman Britain and from a large Welsh breed of cattle once numerous along the border of England and Wales.  They are known for their white faces and were brought to the United States in 1817.  They are the most common beef cattle in the United States.

In 1997, the Hereford Association moved to 1501 Wyandotte and architectural firm HNTB Architects moved into the building.  HNTB took down the bull down and put him into storage.  Discussions with Kansas City Parks and Recreation began in 2000 about taking over ownership of the bull.  Several articles appeared in the Kansas City Star newspaper wondering about the fate of the bull.  Even former Kansas Citian Calvin Trillin wrote an article about it in the New Yorker magazine.  In 2002 an agreement was made between the American Hereford Association and MC Real Estate Services and KC Parks and Recreation to move the bull to Mulkey Square in West Terrace Park.  MC Real Estate Services would construct a new base and pylon and physically move the bull.  MC Real Estate Services and the American Hereford Association would assist in procuring funds for a maintenance endowment.  Parks and Recreation would assume ownership and maintenance responsibility but the Hereford Association can claim the bull for cause within 20 years. 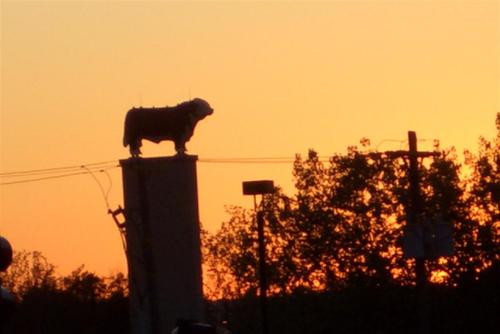