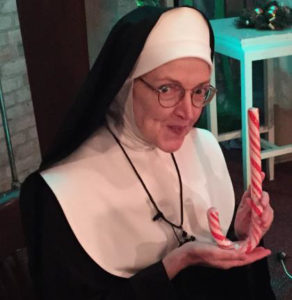 Just in time to get Kansas Citians of all religious leanings into the holiday spirit, Starlight Indoors welcomes Sister’s Christmas Catechism to its heated, indoor Cohen Community Stage House. This seasonal sendup, one of eight shows from the author of the ever-popular Late Nite Catechism theatrical series, brings merriment to Starlight for 23 performances Nov. 26-Dec. 18. Watch promotional video>>

In this holiday mystery extravaganza, Sister takes on the mystery that has long intrigued historians: What ever happened to the Magi’s gold? Of course, we can all assume Mary used the frankincense and myrrh as a sort of potpourri – they were in a barn after all! – but the whereabouts of that gold is another story.

This one-woman show features the very talented actress Mary Zentmyer, who was first cast as Sister in Chicago 20 years ago. Zentmyer delighted Starlight audiences (and set them straight!) last January when she played Sister in a three-week run of Late Nite Catechism at Starlight Indoors.
Now Sister is back to tell the story of the Nativity as only she can. Employing her own scientific tools, Sister will be assisted by the Starlight STARS of Tomorrow (Starlight’s performance troupe of middle and high school students) and willing audience members in creating a living nativity unlike any you’ve seen before. With gifts galore and bundles of laughs, this show is sure to become the newest addition to Kansas Citians’ holiday traditions.

Show times for Sister’s Christmas Catechism on Tuesday-Friday are 7 p.m.; Saturdays, 2 p.m. and 7 p.m.; and Sundays, 2 p.m. Self-parking is free for all shows, and valet parking will be offered for $10.

Tickets for Sister’s Christmas Catechism and all Starlight Indoors shows can be purchased at www.kcstarlight.com, by calling 816.363.STAR (7827) or at the
Starlight box office at 4600 Starlight Road, Kansas City, MO 64132. Ticket prices begin at $36, and a limited number of VIP ticket packages that include free valet parking and a free drink are available for $56. Discount pricing is available for multi-show purchases. Groups of 10 or more also qualify for discount pricing through Starlight’s Group Sales department at 816.997.1137 or groups@kcstarlight.com. More>>