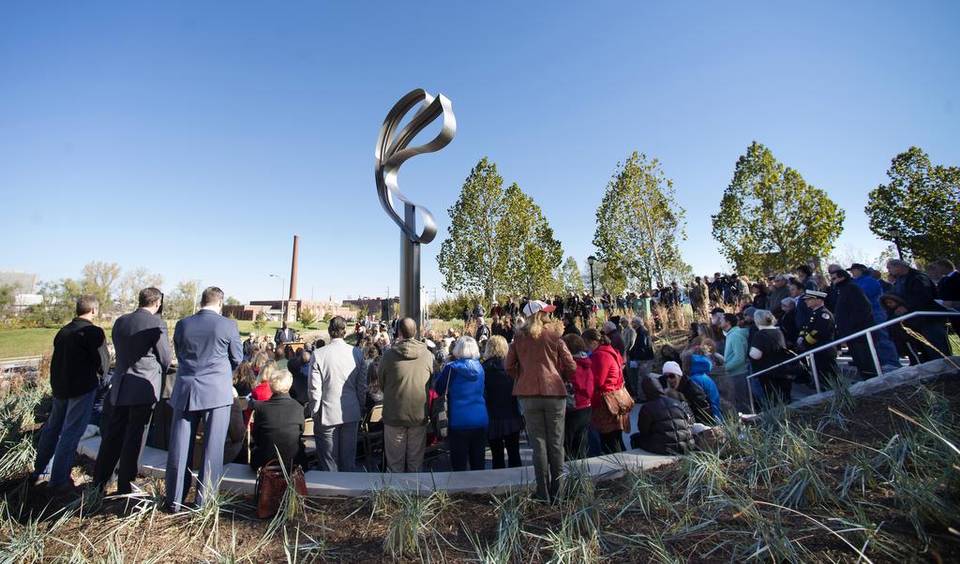 Citing patience, faith and a commitment from the Kansas City metropolitan area, the Skywalk Memorial Foundation, Inc. (SMF) officially dedicated its long awaited memorial at 22nd & Gillham. The Skywalk Memorial Plaza honors the first responders and victims of the skywalks collapse in 1981 that claimed the lives of 114 people and injured more than 200 others.  A large crowd, including Mayor Sly James who led the Pledge of Allegiance, turned out to be part of the dedication that for many is a turning point and a day of healing realized after 34 years.

“We are here today because the events have touched us all in one way or another,” SMF President Brent Wright told the crowd, which included families from out-of-state. “We are members of a club we did not wish to join. These are the ties that bind us together forever.”

The Skywalk Memorial Plaza dedication included a tribute to first responders who heroically worked to rescue victims from the collapse. Among those attending the dedication included Kansas City Missouri Police Chief Darryl Forte, Kansas City Missouri Chief Paul Berardi, along with Retired Deputy Chief Vince Ortega, who was the first police officer at the scene and a SMF Board Member.

“We owe you a debt of gratitude,” stated Wright, who lost his mother and step-father in the collapse. “Today, we remember your service, compassion, and heroism as you worked tirelessly under unimaginable and tragic circumstances. We dedicate this memorial to you.”

The memorial is designed to provide a place of reflection for those affected by the tragic event. It includes a sculpture created by international award winning artist and Kansas City native Rita Blitt, whose 5th grade teacher was injured in the collapse. Blitt, who attended the Kansas City Art Institute, named the sculpture “Sending Love,” which evokes the spirit of two people dancing. The sculpture is 24-feet tall and resides on a base that includes the names of the 114 people who lost their lives in the collapse while attending the Tea Dance. The sculpture was fabricated by A. Zahner and set in place by Belger Cartage.

“It was Belger’s cranes that lifted the skywalks off of the victims 34 years ago, and so it is fitting that Belger lowered the memorial sculpture in place,” said Wright.

“I am honored that I was asked to create a sculpture for the Skywalk Memorial Plaza,” said Blitt. “I hope my stainless steel Sending Love will enhance the loving devotion expressed by the memorial’s creation.”

One of the most poignant moments of the dedication occurred when five readers, all impacted by the collapse, each read a portion of the 114 names. Among the readers:

The Skywalk Memorial Foundation, Inc. is a non-profit 501(c)(3) corporation committed to honoring and remembering the 114 people who lost their lives and those who were injured by the tragic events of July 17, 1981.  Through the planning, design and construction of a permanent memorial, the Foundation also seeks to recognize and honor the emergency/medical personnel, firefighters, police officers, public servants and others who so bravely responded to this unprecedented disaster.