Spirit of Freedom Fountain Getting Major Makeover: $750,000 in GO Bonds Dedicated for Renovations 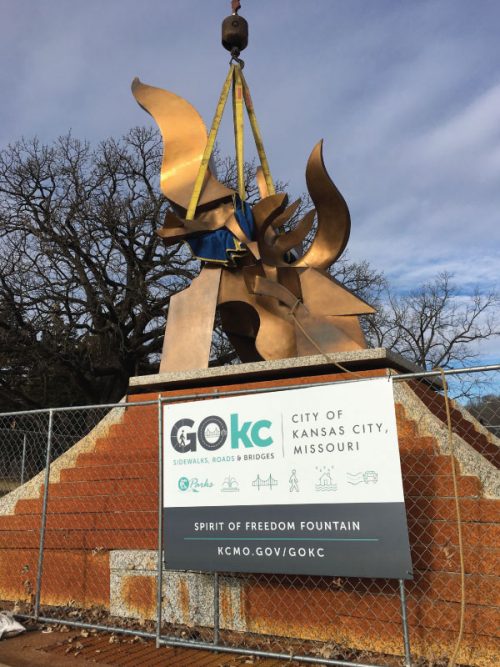 The Spirit of Freedom Fountain is getting the expansive makeover that was included in the $800 million bond package that Kansas City, Missouri, voters approved in the spring.

Workers on Friday began the careful process of removing the 5,000-pound sculpture at Emanuel Cleaver II Boulevard and Cleveland Avenue so that it can be cleaned. Fountain equipment, including the pump, piping and lighting in and around the fountain also will be replaced.

“This means a great deal to this community because you can come here anytime there is water in the fountain and see families here in the park,” said 3rd District City Councilman Jermaine Reed, who helped secure funding for the renovations.

This project is one of several approved by the City Council for the first year of the bonds. The $865,000 renovation is funded by $750,000 in bonds, with the remaining money coming from the Public Improvement Advisory Committee and private donations.

City Manager Troy Schulte said the Freedom Fountain restoration is part of a grand plan to have all public fountains flowing citywide by April 2018.

“You gave us your support for this general obligation bonds program and we’re putting those dollars to work,” Schulte said.

In April 2017, Kansas City voters approved $800 million in bonds to fund a capital improvements program for streets, sidewalks, flood control and other infrastructure needs over the next 20 years. The plan is to spend about $45 million during the first year of the program.

In addition to the fountain renovations, several other citywide projects have already been launched, including:

The City has a website dedicated to citywide GO KC improvements.

Additionally, the performance management team has created the GO KC Project Explorer, which allows residents to track progress and review details of the projects citywide or in their own neighborhoods.