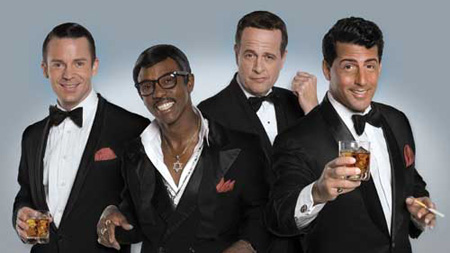 Starlight Theatre audiences will be drawn into the ritz and allure of classic Las Vegas with a swingin’ party of a show. The Rat Pack is Back!, a tribute to the talented stars of the 1960s known as The Rat Pack, takes the stage for three performances the weekend of Sept. 9-11. The show is the finale of Starlight’s 2016 Broadway season.

The Rat Pack is Back! transports audiences back through time and space to a balmy night circa 1960 when three show business legends – Frank Sinatra, Sammy Davis, Jr. and Dean Martin – converged at the Sands Hotel in Las Vegas for the very first time. These stars delivered style with substance, swing with swagger and a non-stop party to which everyone wanted access.

“We want Kansas City audiences to enjoy a September night under the stars with the songs that all generations know and love,” Starlight president and CEO Rich Baker said. “I predict this show will stir up great memories for some and make new, special memories for everyone else!”

The show’s uncanny vocal re-creation of one of the Rat Pack’s raucous, antic-filled performances is paired with unbridled humor. A live 12-piece orchestra is onstage throughout, bringing to life crowd-favorites with period-perfect orchestrations. The hits include Sinatra’s “You Make Me Feel So Young” and “A Foggy Day,” Martin’s “That’s Amoré,” Davis’ “Mr. Bojangles,” and many more. The Las Vegas Sun raves “This is as close as anyone has come to capturing the feeling of the real thing!”

The Rat Pack is Back! is produced by Dick Feeney whose credits include Viva Las Vegas, Showgirls and The Great Gleason.

Discount prices for groups of 15 or more are available by contacting group sales coordinator Staci Shelman at 816.997.1137 or groups@kcstarlight.com.