STARLIGHT INDOORS EXPANDS WITH 5 SHOWS FROM OCTOBER TO MARCH 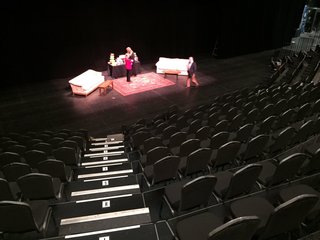 WHAT: The show lineup for Starlight Indoors, a live theatre series launched last January by Starlight Theatre, has been announced for the series’ second season. Included in the 2016-17 indoor series are five Off-Broadway-style productions, featuring unconventional and award-winning comedies.

THE SECRET COMEDY OF WOMEN: GIRLS ONLY is an original comedic variety show that celebrates the honor, truth and humor of being female. The two-woman act, inspired by the earnest and sweetly ridiculous writings the two authors found in their own childhood diaries, blends sketch comedy, improv, audience participation, musical numbers and video. The result is high-spirited, good-natured humor and fun! Suitable for female audiences, ages 10+.
October 11-23, 2016
16 performances – in Cohen Community Stage House at Starlight Theatre
Run time: 2 hours, with intermission
Cost: $36-$56

MEN ARE FROM MARS, WOMEN ARE FROM VENUS LIVE! is an Off-Broadway hit. This one-man fusion of theatre and standup comedy, based on The New York Times best-selling book of the same name, moves swiftly through a series of vignettes – everything from dating to marriage to the bedroom. Since premiering in Paris in 2007, the show has been seen by more than 1 million people across Europe. It made its U.S. debut in 2013. Suitable for adult audiences.
November 3-5, 2016
3 performances – in Cohen Community Stage House at Starlight Theatre
Run time: 2 hours, with intermission
Cost: $26-$52

SISTER’S CHRISTMAS CATECHISM finds Sister returning to Starlight after schooling audiences in Late Nite Catechism last January. This time Sister takes on the mystery that has long perplexed historians: What ever happened to the Magi’s Gold? In this holiday mystery extravaganza, Sister retells the story of the nativity as only she can. Employing her own scientific tools and assisted by the Starlight STARS of Tomorrow youth choir and a gaggle of audience members, she’ll create a living nativity audiences won’t soon forget. Suitable for all audiences.
November 26 – December 18, 2016
23 performances – in Cohen Community Stage House at Starlight Theatre
Run time: 2 hours, with intermission
Cost: $36-$56

DISENCHANTED is a hilarious hit musical that’s anything but Grimm when fairytale heroines come back to life to set the record straight. By tossing off their tiaras and serving up a sassy, subversive musical, these royal renegades have sold out multiple venues nationwide. The irreverent musical was conceived by Dennis Giacino, a former history teacher and musician at heart. Suitable for adult audiences.
March 7-19, 2017
16 performances – in Cohen Community Stage House at Starlight Theatre
Run time: 95 minutes, no intermission
Cost: $36-$56

About Starlight Theatre
Starlight Theatre, recent winner of the Venue Excellence Award from the International Association of Venue Managers (IAVM), is the largest and oldest performing arts organization in Kansas City and the second-largest outdoor producing theatre in the country. Opened as a theater in 1950 and as a not-for-profit organization in 1951, Starlight presents and produces Broadway musicals and concerts. It also offers extensive community outreach and educational programming, including classes, scholarships and Starlight’s Blue Star Awards, one of the largest high school musical theatre award programs in the nation.