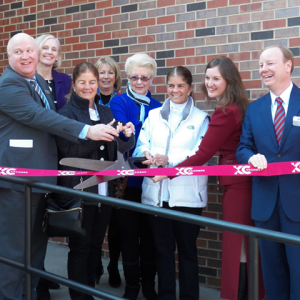 The thousands of Kansas City area students who participate in Starlight Theatre’s performing arts education camps, classes and programs each year have a new place to call home when at the theatre. Starlight’s brand-new Education Pavilion, constructed on the site of its original 1950 Director’s Pavilion, provides 2,700 square feet of climate-controlled space for use by aspiring young artists and others associated with education at Starlight.

The Education Pavilion was officially unveiled at a ribbon-cutting ceremony on March 3 with representatives of the Greater Kansas City Chamber of Commerce, Starlight Board of Directors and Starlight donors and staff joining in the celebration.

Starlight President and CEO Rich Baker welcomed a crowd of about 75 people to the event and shared how his vision of transforming the former Director’s Pavilion, which had fallen into disrepair and was largely used as a storage space in recent years, had become reality and is now poised to help young people across the metro reach for their performance dreams.

“As the Starlight mission statement describes, Starlight is a place where performing arts share center stage with education,” Baker said. “Many times in the past, however, our education staff and programs had to compete for the limited physical spaces available within the Starlight venue. That won’t be the case now that this beautiful facility is open and ready for use!”

The new pavilion was even able to preserve part of Starlight history by repurposing much of the Director Pavilion’s original pine flooring and many of its support beams in the new building.

Among highlights of the March 3 event were:

Following the event, Aubuchon’s mother, Lisa, shared her sentiments. “Thank you so much for giving Sam the opportunity to perform at the event. It was an awesome, positive experience for him,” she said. “He has loved every experience he has had at Starlight, from the awesome people to the performing. I know Starlight will put the pavilion to good use!”