Thanks A Million, Clay and Jackson Counties 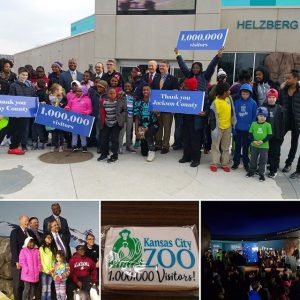 Some of the youngest residents and most avid Zoo lovers in Clay and Jackson Counties–including KC Parks Community Center Winter Break Campers–joined in for the spectacular celebration. Following a few words from the officials, the kids got the unique opportunity to go on the ice shelf and meet our feathered friends beak to beak, seeing King and Gentoo penguins up close inside their arctic environment at the Helzberg Penguin Plaza.

Clay and Jackson Counties have been integral to the Zoo’s success during the last four years. Both counties showed their support for the Kansas City Zoo when the Zoological Tax was passed in 2011. In gratitude, the Zoo gave residents of the Zoological District, Clay and Jackson counties, reduced pricing on admission and memberships, four complimentary visits to the Zoo annually, educational programming through ZooEd and much, much more! Without the formation of the Zoological District, improvements like Helzberg Penguin Plaza, Orangutan Canopy, Tuxedo Grill, and Koala Flats this past summer would not have been possible.