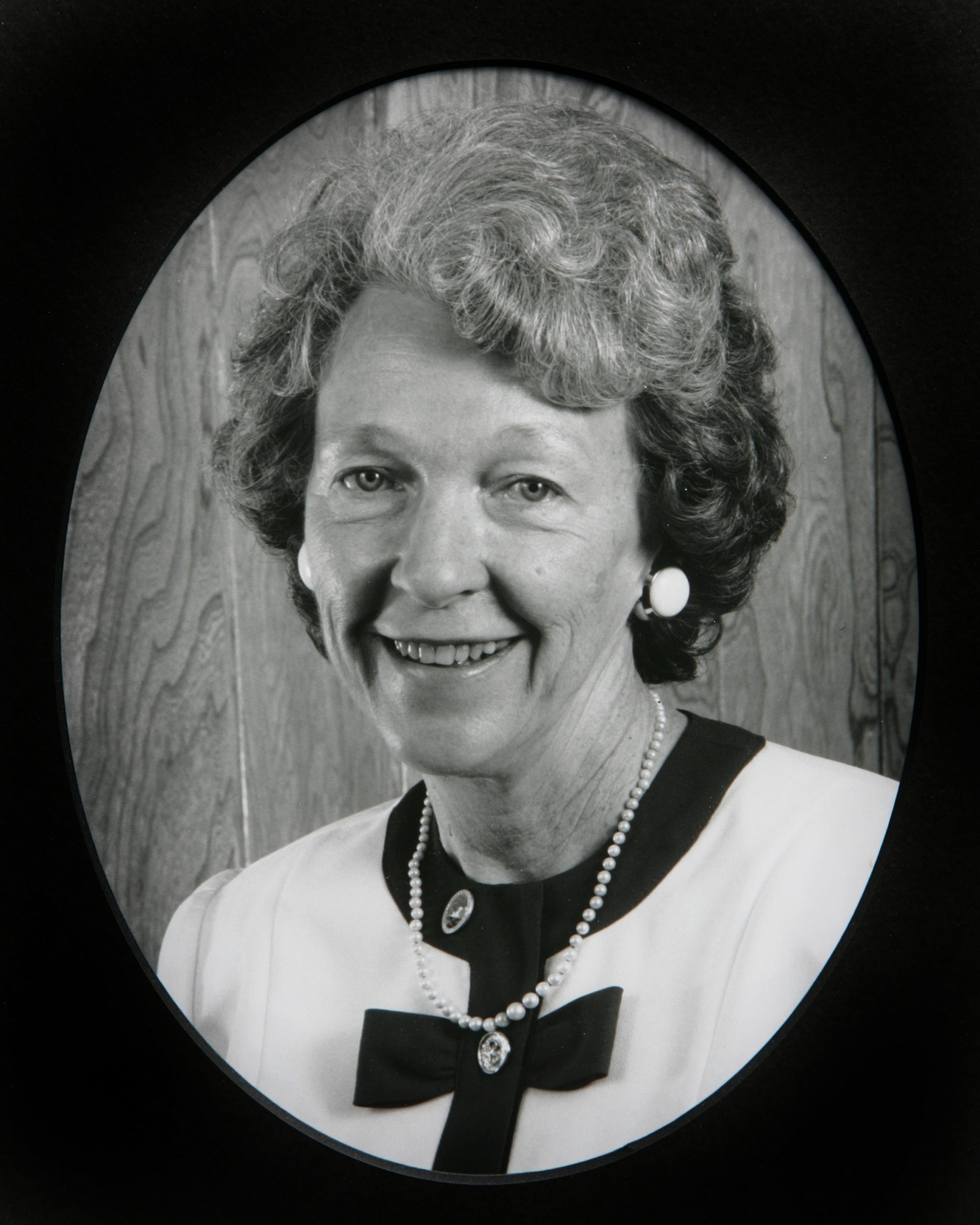 Mrs. Gorman was the first woman appointed to the Kansas City, Missouri Board of Park and Recreation Commissioners. We will be honoring her on Fountain Day, April 19 at the Northland Fountain.

Anita Belle McPike was born in Quincy, Illinois. Her family moved to Clay County, Missouri when she was 11 years old. She attended North Kansas City High School where she met her future husband, Gerald Gorman. She graduated from William Jewell College with a degree in economics and earned a master’s degree from Boston University.  She married Gerald Gorman in 1954 and has had a life full of involvement in civic improvements and community service ever since.

Her leadership in and work with many groups and organizations has helped Kansas City blossom, particularly in the areas of parks, recreation and conservation.  She is a person who can lead and also work behind the scenes to persuade movers and shakers to provide needed support and action to strengthen the park and boulevard system and important public recreational activities.  Her love of nature led her to pursue activities that relate to the importance of the outdoors to people.

Early in the 1960s, Mrs. Gorman joined the fight to prevent commercial development of an open space near her home, an area that eventually became part of Kansas City’s park system and is today known as “Anita Gorman Park”.  The first Kansas City fountain north of the Missouri River was built in this park and she helped to raise funds for it, as well.

Also, in the 1960s she helped lead a fight to save an India Native American archaeological site that was threatened by the placement of a sewer and sewage lagoon.  She and others brought the importance of the historical significance to the Kansas City Park Department’s attention and that property became part of Kansas City’s park system.

Mrs. Gorman was the first woman appointed to the Kansas City, Missouri Board of Park and Recreation Commissioners. She served from 1979 until 1991 and as President from 1986-1991. Many things were accomplished during her tenure.

During her time on the Park and Recreation Board, bonds were passed to support and expand the Kansas City Zoo; property for additional parks and boulevards were acquired; and restorative work on sculptures and monuments owned by Kansas City Parks and Recreation were performed.

Though no longer a Park and Recreation Board Commissioner, Mrs. Gorman has continued her work on behalf of Kansas City’s Parks and Recreation projects.  In 2012 she was a strong supporter of a successful sales tax increase that was part of Mayor Sly James’ effort to better fund the parks and recreational activities for many years to come. It provides a net increase of about $3 million over current funding for parks and for community centers.

She was involved in the fundraising for and the successful promotion of the passage of a temporary sales tax for the improvements and expansion of the Liberty Memorial, now The National World War I Museum and Memorial, recognized by the United States Congress as the nation’s official World War I museum and has received National Historic Landmark status.

Mrs. Gorman is a longtime supporter of Starlight Theatre in Swope Park.  She has co-chaired multiple fundraising campaigns, raising millions of dollars to make improvements to Starlight.  In 2007, the Anita B. Gorman Court of honor was dedicated to honor Mrs. Gorman for her service and support to this wonderful and popular venue.

Nature and conservation are also important in her life.  She served on the Missouri Conservation Commission from 1993 until 2005 and became the first woman to chair the commission in 1996.

Mrs. Gorman has been a member of the City of Fountains Foundation since its beginnings in 1973.  The Foundation works in partnership with the Parks and Recreation Department to operate and maintain Kansas City, Missouri’s 48 publicly owned fountains.  As chair of the Foundation’s Fundraising Committee, she has raised thousands of dollars to assist with renovations and maintenance of our beloved fountains.

Mrs. Gorman also served as the Citizens Association of Kansas City’s Board of Governors and was elected its first woman chairman in 1977; worked for the establishment of the Kansas City International Airport and was on the commission for its dedication in 1972.  She has served on many civic boards and committees including the Salvation Army; City Union Mission; Starlight Theatre; the Convention and Visitors’ Bureau; Blue Cross Blue Shield of Kansas City, Missouri; Conservation of Heritage Foundation; Fine Arts Council; Full Employment Council; William Jewell College Trustee; Director of Commerce Bank; Convention and Visitors Bureau of Greater Kansas City; Citizens Association of Kansas City; Trustee of National Parks and Recreation Association; Greater Kansas City of Trusts & Foundations; Visiting Nurse Association and the Liberty Memorial Association.

On November 19, 2014, National Philanthropy Day, Mrs. Gorman was recognized as the “2014 Outstanding Fundraising Volunteer” by the Mid-America Chapter of the Association of Fundraising Professionals.

Anita Gorman was very instrumental in working with the Mayor and other City Leaders  to overwhelmingly renew Kansas City Earnings Tax in April of 2016 even with a $2 million ad campaign against it.

In 2017, Mrs. Gorman became part of the Honorary Leadership for “Making A Museum KC” an innovative fundraising initiative and capital campaign to increase awareness, raise private funding, and build community support for the Kansas City Museum.

Mrs. Gorman received the prestigious Pugsley Medal from the American Academy for Park and Recreation Administration in 2017 for her outstanding contributions to the promotion and development of public parks, recreation, and conservation in the United States.

The former Vivion Road YMCA’s outdoor swimming pool was  renovated and reopened as the Gorman Pool in the summer of 2018. And in 2019,  435 Magazine included Mrs. Gorman on its list of Kansas City’s 50 Most Powerful.