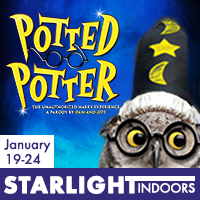 Playing Jan. 19-24 at Starlight Theatre, touring production of POTTED POTTER serves up all 7 Harry Potter books – and a live game of Quidditch – in 70 hilarious minutes.

Written and created by two-time Olivier Award-nominated actors Daniel Clarkson and Jefferson Turner, Potted Potter takes on the ultimate challenge of condensing all seven “Harry Potter” books (and a live game of Quidditch) into a 70-minute show.

The fantastically funny show features all the favorite Potter characters, a special appearance by a fire-breathing dragon, endless costumes, brilliant songs, ridiculous props and a generous helping of Hogwarts magic!

Since launching in Edinburgh, Scotland, in 2006, Potted Potter has played to sold-out houses around the world, including London, Australia, New Zealand, Singapore and Dubai. Starvox Entertainment and Potted Productions introduced the show to North American audiences in 2012 at Toronto’s Panasonic Theatre. After a record-breaking run there, Potted Potter headed to New York City and played a hit Off-Broadway run at the Little Shubert Theatre. The show has since returned to both cities as part of a third North American tour.

Potted Potter is recommended for ages 6 to Dumbledore (who is very old indeed!) – and for Harry Potter experts and novices alike. So, whether you camped outside a bookstore for three days awaiting the release of Harry Potter and the Deathly Hallows, or you don’t know the difference between a Horcrux and a Hufflepuff, the comedy, magic and mayhem of Potted Potter will make for a fun and funny visit to Starlight Theatre.

Potted Potter plays in the intimate, indoor performance space of the Cohen Community Stagehouse at Starlight on Jan. 19-24. Weeknight shows begin at 7 p.m. Due to heavy demand, a new, ninth show has been added Saturday, Jan. 23, at noon, so plenty of tickets are still available. Other Saturday performances are offered at 3 p.m. and 7 p.m., while Sunday shows begin at 3 p.m. and 5:30 p.m. Self-parking is free for all shows, and valet parking will be offered for $10.

Tickets for Potted Potter at Starlight Indoors can be purchased at www.kcstarlight.com, by calling 816.363.STAR (7827) or at the Starlight box office at 4600 Starlight Road, Kansas City, MO 64132. Ticket prices begin at $40; a limited number of VIP ticket packages, which include premium seats and valet parking, are also available. Discount pricing for groups of 10 or more is offered through Starlight’s Group Sales department at 816.997.1137 or groups@kcstarlight.com.