Battle Of Westport Grand Army Of The Republic Monument 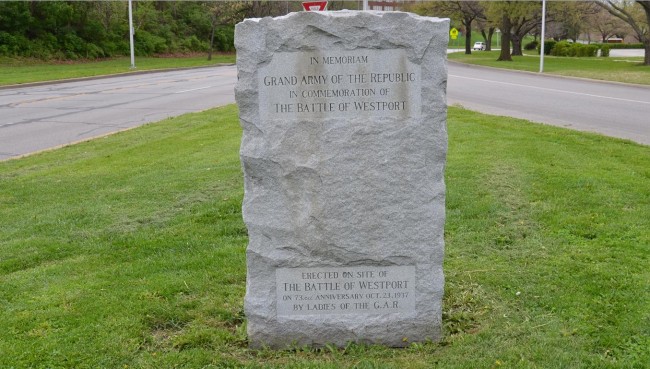 The Ladies of the Grand Army of the Republic made the plans for this monument and carried the work to completion after an appeal by William S. Shepherd, the last known surviving Union veteran of the Battle of Westport.  Mr. Shepherd selected the site as being where some of the heaviest fighting occurred.

The Battle of Westport, considered the largest Civil War battle west of the Mississippi River, occurred in the Kansas City area from October 21-23, 1864.  Identification markers of the battle sites are located at 61st Street and Manchester Trafficway, 63rd Street and The Paseo, the site of the heaviest fighting, and 52nd Street and Wornall, now a section of LoosePark, where the bloodiest segment of the engagement took place.

The first engagement was the Battle of Byram’s Ford at 61st Street and Manchester Trafficway on October 21 and again on the last day when Confederate forces were driven across the BlueRiver at Byram’s Ford and on to the east.

The Union Army won the three-day engagement which destroyed all Confederate hopes west of the Mississippi River.

The memorial was erected at a cost of $350, $100 of which was contributed by Mr. Dehner who also gave of his time and talents toward the construction and completion of the monument.