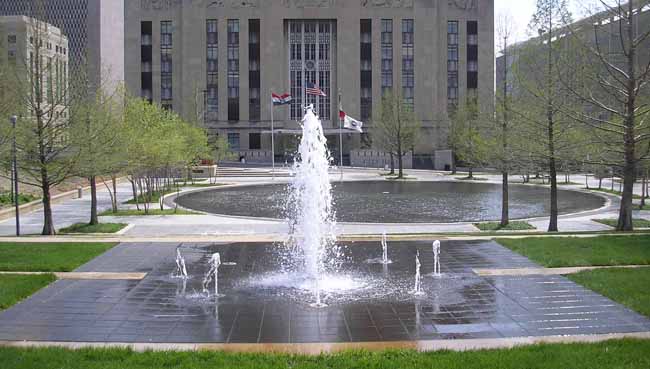 Description
Ilus W. Davis Park, named for the 1960s mayor who was associated with the city’s growth and progress, strengthens the north-south axis and adds softness and color to the government district, often called the civic mall, on the northeast side of downtown.

The park includes a large, shallow reflecting pool, a small fountain that flows to the reflecting pool, with a short water feature due to strong winds, flower beds, shrubs and more than 350 trees, including flowering crab, large red oaks and ginkgoes Four granite pillars serve as memorials to city employees, mostly firefighters and police officers, who have given their lives on duty. A “First Amendment podium” will create a speaker’s corner and the Bill of Rights monument will be moved to the northeast corner of Davis Park.

Conceived by city planners in the early 1990s, thepark cost about $15 million to build including land acquisition and demolition. The money came from local tax revenues, bonds, gambling revenues, federal funds and the local business community. Architect Cindy Frewen-Wuellner says “It is a great space for civic events, which was one of our missions.” The park is modeled on Post Office Square in Boston, a heavily used public area. Frewen used the contour of the land, and chose to embrace the 36 foot rise rather than build a retaining wall. The park was built by Vanum Construction Co. of Kansas City, KS. The landscapers were Sasaki and Associates of Watertown, Mass.