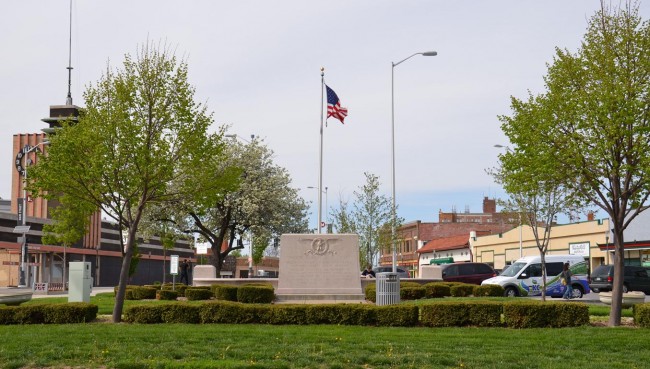 Left as a parkway with the widening of Main Street, this small plot of land was taken over from the Public Works Department by the Park Department of 1926 and named in honor of Major Murray Davis.  Major Davis, a Kansas City lawyer, was killed in the Battle of the Argonne, September 29, 1918, while leading a battalion of the 140th Infantry Regt., 35th Division.  The marker, approved by the City Council and costing $10,000, is carved with patriotic designs and inscriptions.  It was dedicated to his memory by the city and the Murray Davis Post of the American Legion.  The following words appear on one side of the monument.

Killed in action at Exermont France September twenty-ninth MCMXVIII.  Seriously wounded, he refused to relinquish his command until mortally wounded.  He fell leading his comrades to victory.  His last words “Take Care of my Men”.

Flanking the large monument on either side are two smaller markers with the words “140th Infantry” on one side and on the other “35th Division, A.E.F.”