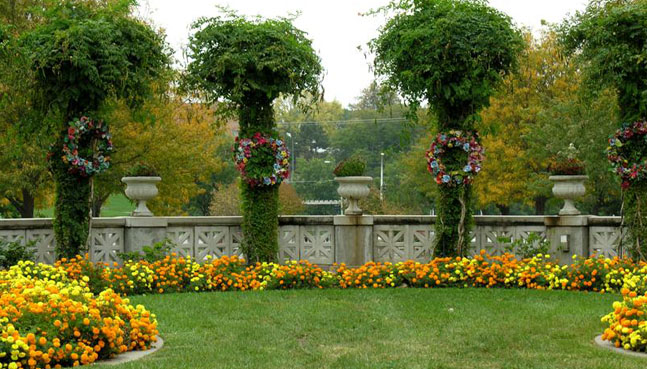 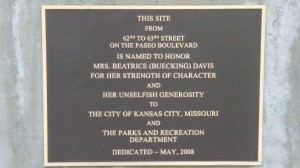 WHEREAS, Mrs. Bea Davis has willingly offered to fund many Parks and Recreation projects, including providing monetary support for the greenhouse in Swope Park, providing plants for many of the City’s flower beds, and was totally involved with the development of the Goin’ to Kansas City Plaza at 12th Street and Vine; and

WHEREAS, Mrs. Bea Davis worked diligently with Parks and Recreation to provide renovation for an easier traffic flow at the round-a-bout on Ward Parkway and Meyer Boulevard to prevent traffic accidents from occurring; and,

WHEREAS, Mrs. Bea Davis offered reward money to Parks and Recreation to aid in identifying vandals who attempted to destroy the Sea Horse Fountain at Meyer Boulevard and Ward Parkway; and,

WHEREAS, Mrs. Bea Davis served as a committee member for the development of Ilus W. Davis Park and the commission of a statue to honor the former Kansas City Mayor.

NOW THEREFORE, BE IT RESOLVED BY THE BOARD OF PARKS AND RECREATION COMMISSIONERS: to recognize and honor Mrs. Bea Davis, by naming the Median from 62nd Street to 63rd Street along The Paseo Boulevard, including the Pergola at 63rd Street as the: “Bea Davis Mall and Pergola.” This special recognition is designed to show a deep admiration and appreciation to Mrs. Davis for her unselfish and generous support of Parks and Recreation through thoughts, words and deeds, as well as several million dollars in contributions to the widely recognized Kansas City, Missouri Park System, and for providing a quality of life for all citizens.