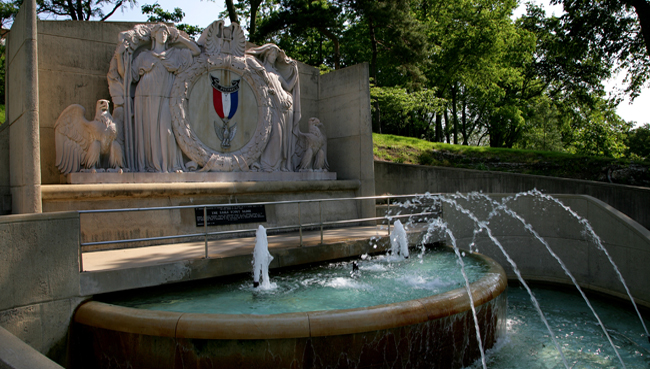 A marble monument that enframes a wreath, bordered on each side by a woman and an eagle.  Within the wreath is the Boy Scout Eagle badge.  A fountain pool and two spiral concrete stairways complete the memorial.

Adolph Weinman, American sculptor born in Germany, designed this monumental 22-foot tall stone sculpture that previously graced an entrance to the Pennsylvania Train Station in New York City built in 1910 and torn down beginning in 1963.  The figures represent Day (woman with a sunflower) and Night (woman with a poppy).  Eagles stand by their sides.  When the sculpture was relocated to Kansas City, Maurice McMullen, a Kansas City architect, designed the setting for the sculpture and included a fountain to complete the memorial as it stands today.  This tribute was made possible by the efforts of John W. Starr.

Inscribed on the 12 inch by 24 inch aluminum plaque are the following words:

Through their vision, ingenuity, generosity and desire to recognize Eagle Scouts across the length and breadth of our nation, this tribute was constructed.

Below the sculpture is a second aluminum plaque that credits Mr. Weinman as the designer of the artistic work which had previously stood above the columns at the Seventh Avenue entrance of the Pennsylvania Railroad Station, describing the Eagle Scout Badge:

History
When the Pennsylvania Railroad Station in New York City, designed by the architectural firm McKim, Mead and White, was completed in 1910 a brochure about the station called it “…the largest structure in the world devoted solely to the use and convenience of railroad passengers.”  Sculptor Adolph Alexander Weisman designed a number of sculptural features for decoration of the building.  By the 1960s, railroad usage had declined and the Pennsylvania Railroad Company could not afford to keep up the building.  Developers wanted to use the station property in other ways and the decision was made to tear the station down.

Kansas City businessman and national Boy Scout executive John W. “Twink” Starr contacted officials at the Pennsylvania Railroad to request the donation of one of the sculpture groups adorning the building to use as a tribute to those Boy Scouts who had earned the rank of Eagle Scout, the highest level in Scouting.  The Pennsylvania Railroad accepted his request and they also generously donated shipping the 62,000 pound sculpture grouping to St. Louis.  Mr. Starr was able to arrange for donation of transportation of the sculpture from St. Louis to Kansas City and additional donations including moving the figures to storage and the storage itself, until the monument was designed and the figures needed.

Maurice McMullen’s design of the monument incorporates the use of stairs leading to the fountain and sculpture as symbolic of the various levels needed to reach the Eagle rank.  The badge in the center of the sculpture is an Eagle Scout badge featuring a silver eagle suspended from a red, white and blue scroll.  The badge replaced a clock that was in the centerpiece when the sculpture was located at the railroad station.  The staff of Kansas City Parks and Recreation was consulted on the project.

Mr. Starr and the Eagle Scout Memorial Committee raised donations for design, labor and funding for the creation of the monument and landscaping.  Mr. Starr and his wife, Martha Jane Phillips Starr, provided funds for the fountain.  The design was approved by the Kansas City Art Commission.

The Kansas City Park and Recreation Department and City of Kansas City agreed to donate property for the structure.  The site at 39th Street and Gillham Road was chosen.  Formal dedication was held on October 8, 1968 but work on the fountain and monument continued until October 1969.

In 2013, an additional gift by the Martha Jane Phillips Starr Donor Advised Fund provided the funds to pay for a new pump and electrical transformer, upgraded lighting, cleaning and other site work at the landmark fountain.

Wondering where the other decorative remnants from the original Penn Station are located? Find out at untappedcities.com.