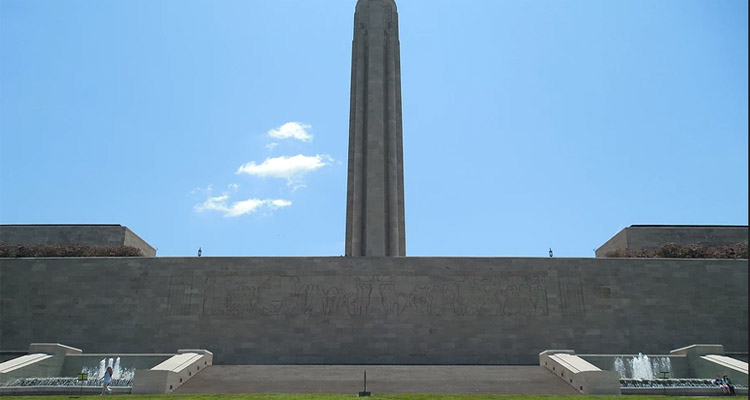 Description
On the north side of the Liberty Memorial, underneath the Great Frieze and flanking the 90′ wide flight of steps, are these dual fountains.  They are part of the original construction of the Liberty Memorial complex and were constructed in 1934-35 and were designed by Wight and Wight, who were Kansas City architects.  Each fountain was placed in a niche comprised of retaining walls and consists of two tiers and were constructed with Indiana limestone, granite weirs and basin edge and glazed porcelain tiles.  The upper tier of each fountain consists of a spray ring with jets that create a waterfall that cascades down into the second level.  Lining the bowed second tier basin is a series of jets that cast water back into the lower pool.

Carved above each fountain is a passage to honor those who died in the war. The inscription at the east fountain, an excerpt from America the Beautiful by Katherine Lee Bates, and reads:

WHO MORE THAN SELF THEIR COUNTRY LOVED

At the west fountain, a quote from Sir Samuel Brydge’s verse on the death of Sir Walter Scott is inscribed as follows:

THE GLORY DIES NOT AND GRIEF IS PAST

The entire Liberty Memorial complex was constructed between 1923 and 1938.  The site was renovated in the early 2000s and was reopened to the public in 2002. 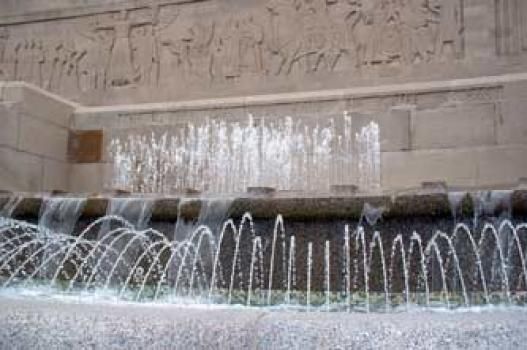