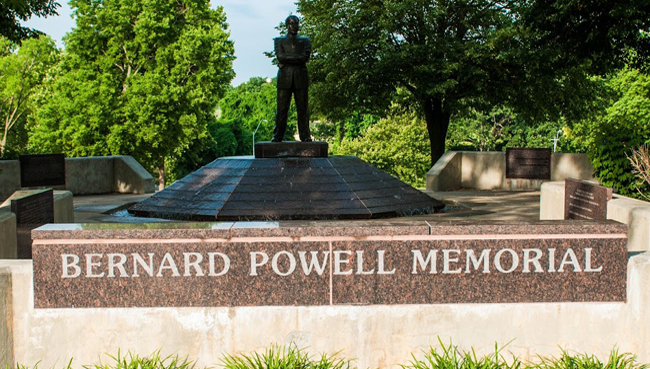 Artist/Designer: Eugene (Bud) Bortner
Installed: 1985
Description
Bernard Powell, an activist who founded the Social Action Committee of 20, was slain in 1979.

After his death, the statue was commissioned and $170,000 raised by Maxine McFarlane (Aunt of Bernard and head of The Action Committee for Social Change) for a fountain in his memory. The fountain and plaza were installed in 1985.  The bronze likeness of Powell was installed in 1991.

The fountain contains a life size figure standing on a base under which water is pumped and cascades down over the 5′ high base into a catch basin. Placed in front of his boyhood home and facing NE, the 5’8″  bronze figure wears a sport jacket and slacks. The legs of the figure are spread and his arms crossed over his chest. The jacket has large pockets on each side. On the left lapel is a round 2″ in circumference button. On the right lapel is a 1″ square button. He is wearing an earring in his left ear and a beret on his head. In the SW corner behind the statue is a slab of concrete approximately. 2 1/2 x 20″ containing a time capsule to be opened in 2041.  To the right of the statue is a bronze plaque embedded in an 18″ wall. 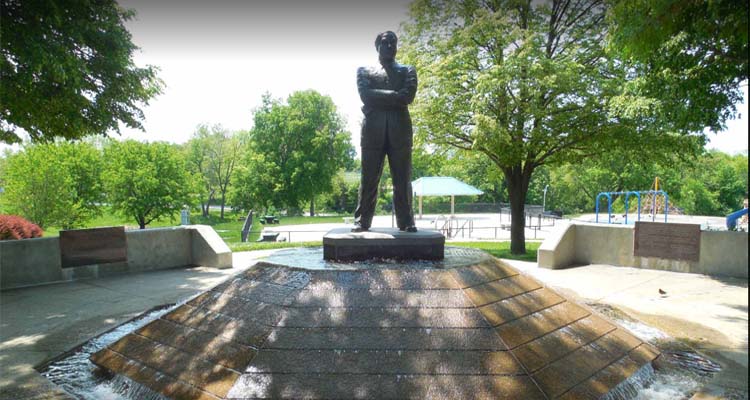