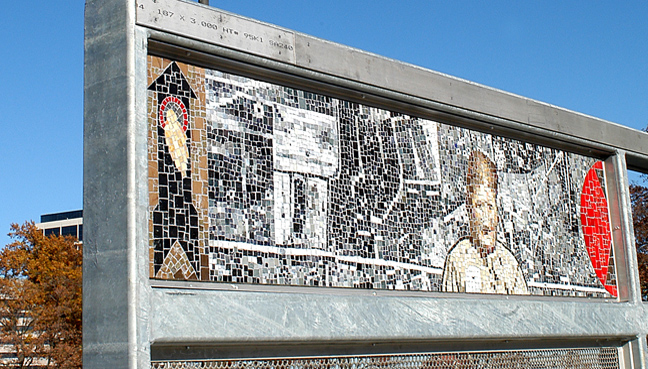 These artist-designed gates form an entrance to the National World War I Museum and Memorial, the home of one of the country’s only collections of World War I artifacts. The open gates create an 84-foot panorama at the entrance of the Memorial; when closed, two separate mosaics are visible from the approach and the egress to the site. The museum archives provided Driscoll the main source for the imagery, that the artist realized in glass mosaics on the façade of each gate. Below the intricate mosaic frieze is a laser cut panel into which hundreds of holes were created to reveal an image of World War I soldiers walking off the battlefield. The work title is taken from a famous WWI poem by Wilfred Owen entitled, Dulce Et Decorum Est, which is a Latin term meaning, “it is sweet and right.” Pro Patria Mori is the last line in the poem and means, “to die for one’s country.”