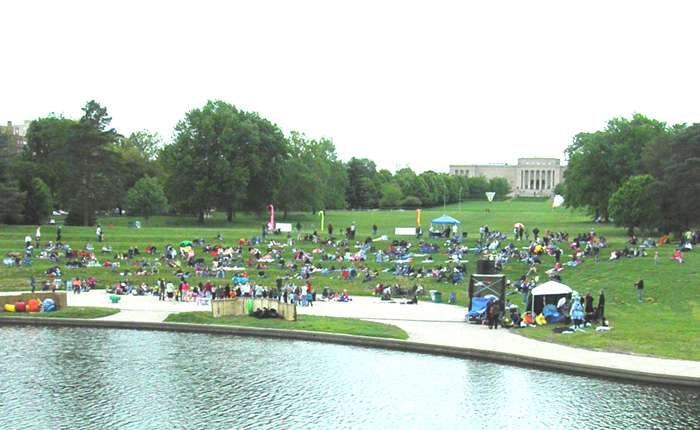 LOCATION:
Oak and 47th Streets, across from the Nelson-Atkins Museum of Art

The property now known as Theis Park was part of the William Rockhill Nelson estate in the late 1800s and early 1900s. In 1947, bonds were passed to develop the property as a Cultural Center park, an idea suggested by real estate developer J. C. Nichols and others. They envisioned a park that linked the Kansas City Art Institute and the Nelson-Atkins Museum on the north side of 47th Street with the then-proposed Midwest Research Institute, the Barstow School, the University of Kansas City, Menorah Hospital and Rockhurst College on the south side of the property. After some legal issues were settled, bonds were sold in 1953, and the property for the park was purchased from the William Rockhill Nelson Trust by the Kansas City, Mo. Board of Park Commissioners in 1955. A small area of property on the east side of the park was purchased from the University of Kansas City.

On the property at that time were a few houses just south of 47th Street, now Emmanuel Cleaver II Boulevard, between Oak and Locust Streets. They were built in the early 1900s as part of a project of William Rockhill Nelson, owner of the Kansas City Star and Kansas City Times newspapers. Mr. Nelson had these houses and several other houses built in the vicinity of his home Oak Hall (torn down to build the Nelson-Atkins Museum of Art) where some of his employees at the newspapers could live. Just south of the houses in the new park area were streets, open grassy areas and the Rockhill Tennis Club. The tennis club was removed in the middle 1950s, and the houses were torn down in 1961.

In 1950, planning began to place a memorial fountain in the Cultural Center park to honor local businessman and philanthropist William Volker, who died in 1948. Mr. Volker served on the boards of many charities, gave much of his money to charitable work and supported the University of Kansas City, now known as the University of Missouri at Kansas City, located near the park. A road built at the south end of the park property in 1948 was dedicated as Volker Boulevard in 1950. The fountain with the theme of the Good Samaritan, which honored Mr. Volker’s charitable work, was the last work of Swedish sculptor Carl Milles. The fountain was dedicated in 1958. Due to the juxtaposition of Volker Boulevard, the Volker Fountain and the fact that the park did not have an official name, the park was very commonly called Volker Park.

Following Frank Theis’ death in 1965, the park area was named the Frank A. Theis Memorial Mall in 1966 and later changed to Frank A. Theis Park in 1991. 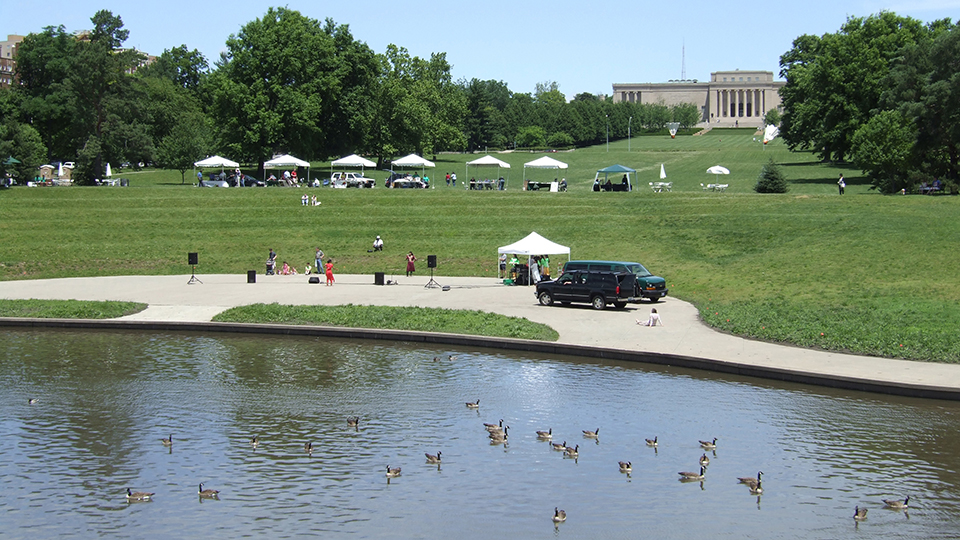