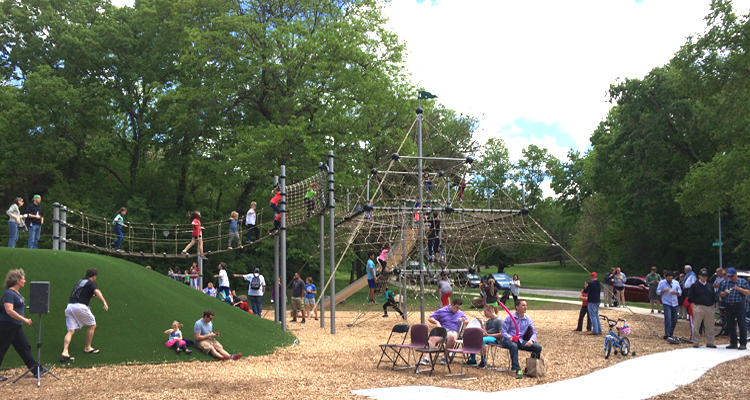 Roanoke Park is a beautiful park with wooded hills and limestone outcroppings. It runs from Thirty-fifth Street on the north, Summit Street/ Southwest Trafficway on the east, Valentine Road on the South and Wyoming Street on the west and contains 37 acres.

History
Property for the park was acquired from 1901 through 1923. The first two tracts were donated by the South Highland Land and Improvement Company and others were given by local individuals. Housing in the Roanoke area began to be developed in the late 1800s, with most being built in the early 1900s. Prominent and wealthy Kansas Citians owned many of the houses. The properties given for a park were rugged and difficult to make into residential properties so they were donated for a park to protect property values and undesirable growth.

From the 1914 Park System of Kansas City report: “This park is a beautiful preservation of wooded ravines lined with rugged cliffs, in the western section of the city. It was entirely acquired by deeds of gift from the South Highlands Land and Improvement Company and others, who had caught the spirit of conserving nature’s beauty before it became marred, and of the resulting enhancement in value of nearby property.”

While the name “Roanoke Park” was used by 1904, Roanoke Park was not officially made a park until 1908 (Park Board Resolution 8261, Dec. 14, 1908, City Ordinance 944, Jan. 13, 1909). The name “Roanoke” came from the Roanoke Investment Company which purchased property in the area for residential development in 1888 and filed the plat for development.

The brick roadway that runs through the park between Karnes Boulevard and Valentine Road is Roanoke Road. It came into the Kansas City Parks and Recreation system in 1971 and was declared a boulevard; prior to that it was controlled by the Public Works Department. Brick was first placed on the road in 1915. A possible reason for the placement of brick is because the road was used by several nearby companies located in the Roanoke Valley area transporting heavy materials such as coal and stone. A brick roadway would hold up better than a macadam road, a broken stone surface commonly used by the City in the early 1900s.

Another interesting note: A little further east of the park in the Roanoke area, the Kansas City International Fair was located between what is today 38th Street and Valentine, Pennsylvania and Roanoke Road. Opening on September 17, 1883, the Fair featured horse races and other fair activities such as band concerts, livestock exhibitions, food and handicrafts. It was a very popular event and by 1886 drew 25,000 people. The grounds closed in 1887 when the Roanoke Investment Company purchased the property to develop homes and the Fair moved to 15th and Prospect. 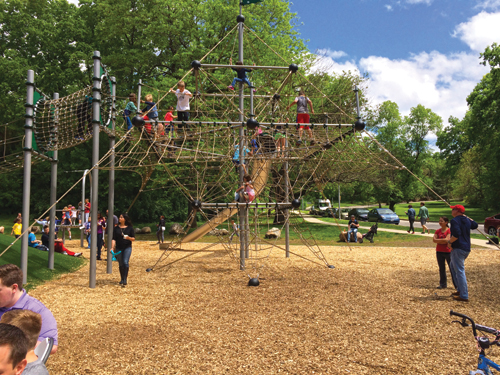