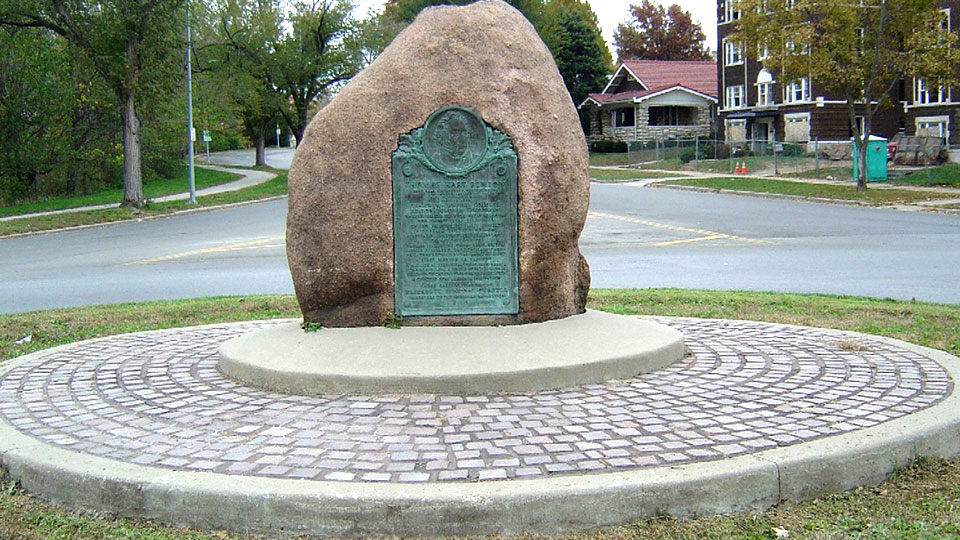 Location: In KesslerPark at the intersection of St. John Avenue, Gladstone and Benton Boulevards.

This memorial was erected through the efforts of Mrs. H. J.S. Seely and a committee of the Elizabeth Benton Chapter of the Daughters of the American Revolution.  Thomas Hart Benton was a man of extraordinary vision.  His high place in National History was won by his ability to look into the future.  Where other public men of his time could see only a wilderness, his rich imagination peopled it with villages and cities.  Where others saw only a trading camp at the mouth of the Kaw, Benton pictured a splendid manufacturing center.

To him is due the cheap land system, specie standard; Oregon, California and Transcontinental Railway Lines.  A national statesman who was never connected with a single act of personal dishonor or one unworthy act of legislature.

A devoted son, husband and father.

The other tablet reads as follows:

Here where these rocky bluffs meet and turn aside the sweeping current of this mighty river, here where the Missouri after pursuing her southern course for nearly two thousand miles, turns eastward to meet the Mississippi, a great manufacturing and commercial community will congregate and less that a generation will see a great city.